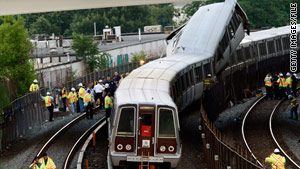 The National Transportation Safety Board said the June 22, 2009, accident was preventable.

Its report said the Washington Metropolitan Area Transit Authority (WMATA) failed to ensure that a verification test developed after an earlier incident was used system-wide. The test would have identified the faulty track circuit before the accident, the NTSB said.

The accident near the Fort Totten Station on the system's Red Line occurred when one train struck the rear car of a stopped train. Automated systems should have prevented the two trains from occupying the same stretch of track at the same time.

"The layers of safety deficiencies uncovered during the course of this investigation are troubling and reveal a systemic breakdown of safety management at all levels," NTSB Chairman Deborah Hersman said.

Hersman said the safety board hopes the accident will be a catalyst for change at WMATA and lead to greater federal oversight and improved safety standards for rail transit systems nationwide.

The board said a "lack of a safety culture" within WMATA contributed to the accident, as did ineffective oversight by WMATA's board of directors and the Tri-State Oversight Committee, a little-known organization responsible for overseeing Metro safety.

The safety board also said the Federal Transit Administration's "lack of statutory authority" contributed to the situation.

Earlier this year, the NTSB added improved subway car design to its list of "most wanted" transportation safety improvements. The safety board is recommending that the government set standards for the ability of transit cars to withstand crashes, as well as the ability of passengers to get out of damaged cars.