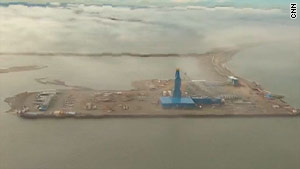 BP's Liberty Island project, in which the company would drill from a man-made island, is under new scrutiny.
STORY HIGHLIGHTS
RELATED TOPICS

Prudhoe Bay, Alaska (CNN) -- Three miles into the Beaufort Sea from the North Slope of Alaska sits a 32-acre, man-made gravel island with a gigantic blue drilling rig atop it.

It is BP's Liberty Island, a nearly $1 billion project. As planned, the rig would drill two miles down into the seabed, then sideways up to eight miles across it, to find an enormous reservoir of oil.

BP had been scheduled to begin drilling later this year. But since the environmental disaster in the Gulf of Mexico, when a BP-owned well blew out off Louisiana and spewed crude oil into the ocean for nearly three months, federal and state regulators are taking a new look at the Liberty project.

By dumping tons of gravel into the sea, only 22 feet (7 meters) deep at that point, environmentalists say BP has managed to game the federal permit system by getting the Liberty project classified as an onshore installation. That means its subject to less rigorous rules than offshore projects.

"If anything were to go wrong, if there were an oil spill, that oil is going into the ocean," said Rebecca Noblin, an attorney for the advocacy group Center for Biological Diversity. "It's not on land. So this is drilling in the water."

But the company says drilling from the island is safer than using an offshore rig in the Arctic. BP spokesman Steve Rinehart said the company "carefully followed the state and federal permitting systems" when the project won regulatory approval in 2007. Addressing environmentalists' complaints, he added, "It is hard to imagine that anyone who knows the facts or the history of this project would make such a claim."

On Liberty Island, BP is attempting to drill down and sideways -- a method known as "extended reach" -- to an extent never tried in the United States. BP touts it as "one of the oil and gas industry's most significant technological advances."

But oil experts say drilling sideways has some risks, including the threat of so-called "gas kicks" that can erupt when methane bubbles rush through the sideways pipe -- and of course, the inability to control a huge oil spill in an already fragile environment.

Liberty Island is connected via causeway to an existing BP drilling platform called Endicott Island. In 2006, oil and diesel fuel leaked from Endicott Island into the fragile Arctic Ocean, and the company was fined heavily by federal regulators because the spill was found to have begun in badly corroded pipes.

Environmentalists like Noblin say that should a spill occur, the North Slope and Liberty Island are among the worst places to follow through with a response.

Rinehart said BP has put off the project's planned start date until 2011 and will cooperate with any federal and state regulators who want to take another look at its plans.