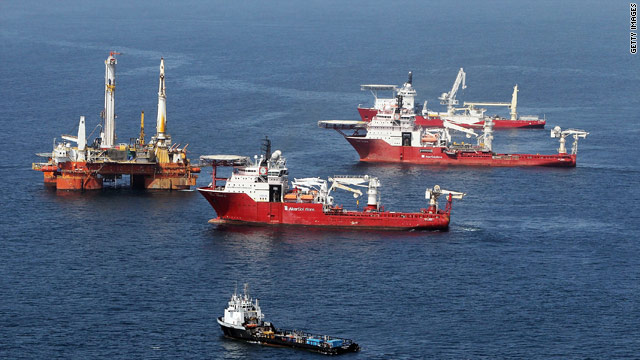 Ships assist collection of oil Friday near the source of the Deepwater Horizon leak before leaving to avoid a storm.
STORY HIGHLIGHTS

New Orleans, Louisiana (CNN) -- Oil left on the surface of the Gulf of Mexico is breaking down naturally now that the flow of crude has been cut off beneath the surface, a Coast Guard admiral said Sunday after touring the scene.

Rear Adm. Paul Zukunft said the remnants of Tropical Storm Bonnie did little to affect the oil slick, which is breaking down "very quickly."

"The storm itself was not that significant," Zukunft told CNN after an aerial survey of the northern Gulf on Sunday. "We've had nine days of no new oil being released, so what we're seeing is the remnants of oil that was released nine days ago."

BP crews managed to temporarily cap the undersea well at the heart of the three-month-old disaster on June 15. But efforts to close off the gusher permanently by drilling a relief well were delayed by the storm, which forced the ships involved in the process to evacuate the area. Those ships have returned to the area since the storm, he told reporters Sunday night.

Video: Ships back in Gulf; no new oil seen

Zukunft told reporters that he saw only one large patch of emulsified oil, about 12 miles off Grand Isle, Louisiana, during his six-hour aerial tour. No oil could be seen in Louisiana's Lake Borgne, Lake Pontchartrain or Chandeleur Sound, while only a light sheen was visible in other parts of the Gulf.

"The oil is basically approaching the end of its life cycle," he said.

Oil had gushed from the ruptured well for nearly three months after the Deepwater Horizon rig exploded April 20, leaving 11 workers dead. Officials have said a relief well is the only permanent solution to the disaster, which saw as much as 60,000 barrels (2.5 million gallons) of crude spewing into the Gulf every day.

Ships critical for drilling the well started evacuating Thursday and returning Saturday afternoon, once Bonnie lost her punch after crossing southern Florida. The weather forced officials to temporarily scale back efforts to search beneath the surface for leaking oil and permanently plug the leak, drawing some criticism from local officials that the federal government was overreacting to the storm.

But retired Coast Guard Adm. Thad Allen, who is leading the federal government's response to the spill, emphasized the need to move and protect equipment before a storm. He said told reporters Friday that he was still "haunted" by the sight of submerged school buses "that could not be used for the evacuation" after Hurricane Katrina struck New Orleans in 2005.

"We're going to be playing a cat-and-mouse game for the remainder of the hurricane season," Allen said.

Sunday, Allen said officials were examining new oil deposits on the shoreline created by the storm, and booms that were in sensitive marsh areas caused damage during the storm and may need to be removed before another surge happens.

But with the storm's passing, work on the relief well is scheduled to continue, he said. And by August 1, he said crews could begin pumping drilling "mud" into the ruptured well to force oil back into the reservoir below -- a process known as a "static kill."