Cupcakes get 'butch' with sweets for manly men 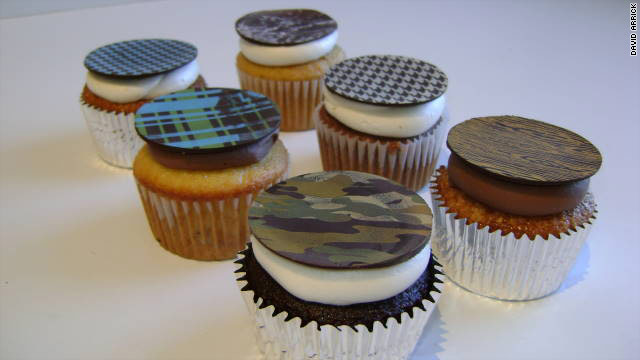 (CNN) -- If masculinity could take the form of a 2-inch frosted cupcake, David Arrick would have the recipe.

His New York cupcake company, Butch Bakery, is an anomaly in a world seemingly dominated by all things dainty and cute. Arrick refuses to serve the "frilly, pink-frosted, sprinkles-and-unicorns" variety. Instead, customers can proclaim their machismo with cakes made with beer, whiskey, bacon and crushed pretzels.

"It was born out of necessity and a love of buttercream," Arrick said of his 9-month-old business.

Each Butch cupcake sits under a generous layer of frosting and a chocolate disc with a camouflage, wood grain, plaid, houndstooth or other "manly" pattern.

Like a mixed-martial arts fight, Arrick's cupcakes can pack a serious punch. Six of his 12 varieties feature alcohol -- and customers feel the hit.

"The ones with alcohol are actually pretty potent," said David Barrineau, who ordered Butch cupcakes as a joke for the men and women in his advertising agency.

"The first one I tried ... it had wood grain on it. It definitely had whiskey in it," Barrineau said. "I think we all got a buzz from these -- it was pretty strong!"

But can whiskey-infused cupcakes disguised in camo really transform cupcakes into macho fare?

"I think if you try them, you wouldn't have to ask," Barrineau said.

Arrick said he doesn't think the average man would necessarily turn down a pastel, ladylike cupcake.

But, if given the option, "a guy is going to go for the one that has camo or plaid on it."

The flour-and-frosting world seems a far cry from Wall Street, home to a major law firm where Arrick worked as an asset-backed securities attorney. But like many in 2007 and 2008, Arrick's career caved unexpectedly.

As Arrick looked around the streets of New York and mulled his options, he marveled how the city's vast array of bakeries and cupcake shops kept growing and making money during a recession.

But all the cupcakes seemed too cookie-cutter.

"There's been a vacancy in the market with marketing toward men," he noticed.

That's when the epiphany hit. Arrick liquidated his 401(k) and gambled $25,000 on the macho bakery of his dreams.

Butch Bakery went from selling 40 cupcakes a week to 400 cupcakes a week -- all without a storefront. The bakery operates out of a commercial kitchen shared with other businesses and sells its manly confections online.

While most cupcakes are, stereotypically, feminine or frilly, Arrick is keenly aware that he himself is playing on stereotypes with his use of bacon, beer and in-your-face manly advertising.

"It's so tongue-in-cheek," Arrick said.

Ironically, 95 percent of Butch Bakery's customers are women. Arrick said many are searching for creative gifts after exhausting cliche ideas such as neckties.

Arrick has received order requests from around the world, including from troops in Iraq and Afghanistan.

Kathryn Donaldson tried to place an order for her husband, who is stationed in South Korea. Donaldson said the Butch baked goods would be the perfect pick-me-up for soldiers overseas.

"The stuff we send them, it means a lot to them," Donaldson said. "We can send them care packages and everything, but something like that is so much more special because it's so unique. We can't do the flavorings like rum and coke. We can't figure out how to make them taste like rum and coke."

Butch Bakery delivers to Manhattan, Queens and Brooklyn, but does not ship out-of-state. Arrick said his growth is limited by storage and oven space, but he hopes to start shipping orders outside New York by the end of this year.

Arrick doesn't have a target date for setting up a storefront. But Barrineau, a loyal fan of the "Tailgate" cupcake, says he can already forecast the entrepreneur's future:

"I think he would see a line of big, hairy men waiting in line for cupcakes."