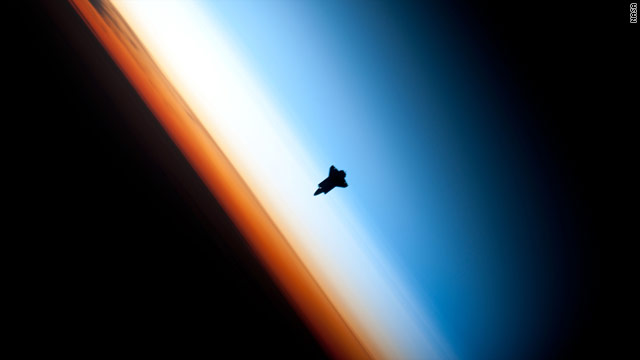 Shuttle Endeavour is silhouetted against Earth's atmosphere as it prepares to dock with the space station in February.
STORY HIGHLIGHTS

(CNN) -- An upper layer of Earth's atmosphere recently shrank so much that researchers are at a loss to adequately explain it, NASA said on Thursday.

The thermosphere, which blocks harmful ultraviolet rays, expands and contracts regularly due to the sun's activities. As carbon dioxide increases, it has a cooling effect at such high altitudes, which also contributes to the contraction.

But even these two factors aren't fully explaining the extraordinary contraction which, though unlikely to affect the weather, can affect the movement of satellites, researchers said.

"This is the biggest contraction of the thermosphere in at least 43 years," John Emmert of the Naval Research Lab was quoted as saying in NASA news report.

Emmert is the lead author of a paper announcing the finding in the June 19 issue of the journal Geophysical Research Letters.

"We cannot explain the abnormally low densities, which are about 30 percent lower" than from previous contractions, Emmert told CNN.com.

The thermosphere lies high above Earth's surface, close to where the atmosphere ends and space begins. It ranges in altitude from 55 miles (90km) to 370 miles (600km) above the ground -- the realm of meteors, auroras, space shuttles and the international space station.

This is the biggest contraction of the thermosphere in at least 43 years.
--John Emmert, the Naval Research Lab, quoted in a NASA news report
RELATED TOPICS

The thermosphere interacts strongly with the sun and hence is greatly influenced by the sun's solar activity, which occurs in cycles.

When solar activity is high, solar extreme ultraviolet rays warm and expand the thermosphere. When it's low, the opposite occurs.

The collapse occurred during what's known as a "solar minimum" from 2007 to 2009, during which the sun plunged into an unprecedented low of inactivity. Sun spots were scarce and solar flares were nonexistent, NASA reported.

Still, the collapse of the thermosphere was bigger than the sun's activity alone can explain.

Emmert suggests that the increasing amounts of carbon dioxide making its way into the upper atmosphere might have played a role in the anomaly.

Carbon dioxide acts as a coolant in the upper atmosphere, unlike in the lower atmosphere, shedding heat via infrared radiation. As carbon dioxide levels build up on Earth, it makes its way into the upper levels and magnifies the cooling action of the solar minimum, Emmert said.

As carbon dioxide gradually builds up, "we expect every solar minimum to be a little lower, and then this solar minimum comes along, but instead it's a lot lower. And that's pretty surprising," said Stanley Solomon, a senior scientist with the National Center for Atmospheric Research who wasn't directly involved in this research.

But, Emmert said, even taking into account the solar activity and carbon dioxide buildup doesn't fully account for this abnormal collapse.

Despite the puzzling anomaly, the collapse of the thermosphere is unlikely to have a direct effect on our daily lives, said Solomon.

But the contraction of the thermosphere can affect the drag on satellites and space junk orbiting at those levels.

"Debris that's up there stays up longer. The amount of orbital debris is a concern for space navigation. There is concern that space debris is building up," Emmert said.

The abnormal change in the thermosphere may also affect other layers of the atmosphere, and though less certain, can result in slight disruptions of satellite communications, including global-positioning system signals, Solomon said.

Emmert said there were still other possibilities unaccounted for that could have contributed to this phenomenon.

The researchers say they will continue to monitor the upper atmosphere, which is already rebounding.

"So we're probably going to work in the next couple of years to try and unravel this," Emmert said.