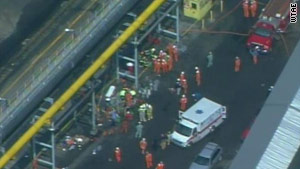 Authorities got a 911 call shortly after 9:30 a.m. reporting the blast at the United States Steel Corp. plant.
STORY HIGHLIGHTS

Kevin Evanto said authorities got a 911 call shortly after 9:30 a.m. reporting the blast at the United States Steel Corporation's Clairton Plant, which the company says is the largest coke manufacturing facility in the United States.

"It appears one of the coke ovens at the plant exploded," Evanto said.

Most of the injuries are burn-related, he said, although one person was taken to the hospital with chest pains. Victims are being treated at various hospitals in the Pittsburgh, Pennsylvania, area, Evanto added, with one person being transported by helicopter.

"At this point, we believe everybody is accounted for," the spokesman said.

The United States Steel Corporation told CNN in an e-mail Wednesday it is investigating the incident.

"U. S. Steel's Security & Fire Protection Services personnel are working with local emergency responders," wrote company spokeswoman Erin DiPietro. "We will assess the extent of repairs and impact on operations at a later time."

The plant has 12 coke oven batteries that produce approximately 4.7 million tons of coke annually, according to the United States Steel Corporation website. The ovens heat coal at extremely high temperatures to carbonize it so it becomes coke -- a fuel used for producing steel.

Video from CNN affiliate WPXI showed ambulances and emergency crews in front of the coke plant. It also showed a side of the facility that was missing an entire wall, with cinder blocks strewn across a wide area.

The plant is located about 15 miles south of Pittsburgh.