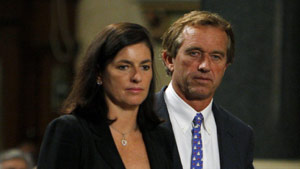 Mary Kennedy and Robert F. Kennedy Jr., seen in a 2009 photo, are in divorce proceedings, according to court records.
STORY HIGHLIGHTS
RELATED TOPICS

New York (CNN) -- The wife of Robert F. Kennedy Jr. faces a court date next week on a drunk driving charge, the latest in a string of events that began when Kennedy filed for divorce, according to records from Westchester County.

Records from the Westchester County Clerk show that Kennedy filed for divorce from his wife, Mary Kennedy, on May 12.

The next evening, according to police records, Bedford police responded to a 911 call. When police arrived at the Kennedy residence they found the couple in an argument over taking their four children to a carnival at St. Patrick's School.

According to a "domestic incident" report filed by the officer on the scene, "Mr. Kennedy stated that his wife was intoxicated and was acting irrational so he took the children to the carnival to remove them from the situation."

No one was injured, the report said.

Two days later, Mary Kennedy was arrested for driving while intoxicated. Bedford Police Lt. Jeff Dickans told CNN that Mary was arrested around 9:15 p.m. on May 15. Dickans said that Bedford police officer Patricia McGraw saw Kennedy's 2004 Volvo swerving onto the curb of Greenwich Road in Bedford and asked her to pull over.

Kennedy had slurred speech, and a blood-alcohol-content above 0.08 percent, the legal limit in New York. She was charged with driving while intoxicated.

"The DUI is pending and we're hopeful that we'll be able to resolve it in the future," her lawyer, Kerry Lawrence, told CNN.

She is due to appear in Town Court on July 22. Lawrence declined to comment on the divorce filing.