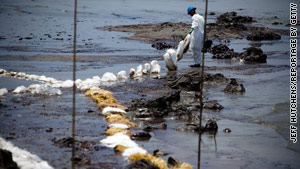 The government says BP is financially responsible for all costs associated with the response to the Gulf oil spill.
STORY HIGHLIGHTS

(CNN) -- The Obama administration has sent a fourth bill for $99.7 million to BP and other responsible parties relating to the energy company's oil spill, according to a statement from the Deepwater Horizon Incident Joint Information Center.

The government said BP is financially responsible for all costs associated with the response to the spill, including efforts to stop the leak at its source, reduce the spread of oil, protect the shoreline and mitigate damages, as well as long-term recovery efforts for individuals and communities.

The government bills BP and other parties regularly for costs incurred by the federal on-scene coordinator to support federal, state and local response efforts and ensure the Oil Spill Liability Trust Fund is reimbursed on an ongoing basis.

This is the fourth bill the administration has sent to date. BP and other responsible parties have paid the first three bills, totaling $122.3 million, according to the statement.

The money received from BP will help to replenish the $1.5 billion Oil Liability Trust Fund that covers damage costs associated with oil spills, according to the statement.

For information about the response effort, visit www.restorethegulf.gov.