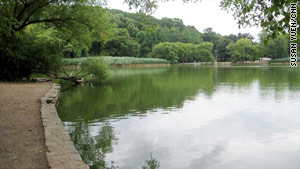 The Brooklyn geese were herded into a fenced area, put into crates and taken to a facility to be euthanized.
STORY HIGHLIGHTS

New York (CNN) -- Four hundred Canada geese from Brooklyn's Prospect Park were herded into crates and euthanized last week in an effort to reduce their number near New York's airports, according to U.S. Department of Agriculture.

Measures to lower the number of Canada geese close to John F. Kennedy and LaGuardia international airports have been in place since last summer, said Carol Bannerman, spokeswoman for the USDA's Wildlife Services.

New York City officials asked for federal assistance with solving the goose problem after US Airways flight 1549 was cripped by a bird strike and narrowly avoided crashing by successfully landing in the Hudson River in January 2009.

"Our responsibility is to look at safety hazards and the Canada geese can represent a significant aviation hazard," Bannerman said.

The round-up last week came to light in New York media on Tuesday. The group People for the Ethical Treatment of Animals (PETA) issued a statement criticizing the euthanization and calling on authorities to use other methods to keep birds away from airports.

"Killing every goose within a seven-mile radius of an airport doesn't fly -- it isn't humane, and it isn't a viable solution for either people or birds," PETA said in the statement.

"When geese are killed, more birds simply move in to use available resources, and the temporary spike in the food supply results in accelerated breeding. What follows is a vicious killing cycle that is cruel, expensive, and pointless."

The group cited other methods including a radar system at the Seattle-Tacoma International Airport to detect flocks of birds, as well as lasers and pyrotechnics, as being better ways to change birds' flight paths.

The Brooklyn geese, which are molting at this time of year and cannot fly, were herded into a fenced area, put in poultry crates and taken to a facility where they were euthanized with carbon dioxide, said Bannerman. The geese were later bagged and buried in a landfill, she said.

Last month the radius from JFK and LaGuardia airports where Canada geese would be removed and euthanized was increased from five to seven miles and Bannerman said the new radius included Brooklyn's Prospect Park.

"JFK and LaGuardia are between six and seven miles from Prospect Park border-to-border," she said adding that she understood that attachment that people in the area have to the geese.

"We made the process as least stressful as possible for the geese," she said.

Ed Bahlman, who said he is 60 years old and has been going to Prospect Park most of his life, called the removal of the geese "unnecessary." He said that he and his companion go to the park most mornings at around 7 a.m, and had started feeding a goose they called "Beaky" early last year. The goose had lost it's upper beak to a fishing hook.

"On Wednesday all the geese were there, we fed Beaky and on Thursday they were gone. Beaky was gone, too," he said. Bahlman who said he found zip ties and rope in the park said that the authorities had accomplished nothing by killing the geese.

"They have done a lot of harm and we don't believe they have done anything to help the public, they've done more harm than good," he said.

Peter Brown, who said he was a fireman who has lived in the area all his life and goes to the park regularly with his 10 year old son said that although he thought the geese were beautiful and understood that it had upset the neighborhood, he agreed with the decision to remove them.

"What's more important, 200 geese or 200 people? That's the choice that has to be made," he said adding that he flies frequently.

Bannerman said Canada geese were responsible for over 600 damaging airstrikes to U.S. planes between 1990 and 2008, and that their population was rapidly increasing.

Bannerman said that 1,200 Canada geese were euthanized in 2009 in 17 New York locations.