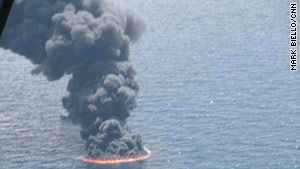 A controlled oil burn near the site of the Gulf of Mexico oil leak is done on the surface of the water Sunday.
STORY HIGHLIGHTS

Washington (CNN) -- The federal government announced Monday it is issuing a new order to suspend deepwater drilling in the Gulf of Mexico and off the coast of California until as late as November 30.

While describing the new step as a suspension, rather than a moratorium like the original ban issued in May in the wake of the Gulf oil disaster, the new order expands the drilling operations covered to include those off California in what is called the Pacific region. The original moratorium was limited to deepwater drilling in the Gulf of Mexico.

Obama administration officials have repeatedly indicated their intention to reinstate the moratorium since the initial ruling.

"The new suspensions are supported by an extensive record of existing and new information indicating that allowing the deepwater drilling operations that will be suspended would pose a threat of serious, irreparable, or immediate harm or damage to the marine, coastal, and human environment," an Interior Department statement said.

Interior Secretary Ken Salazar said the revised suspension order focused on the specific technology involved and type of drilling operation, rather than the depth of water in which it occurs. The order also made clear that some operations included in the previous moratorium could be permitted under the new suspension order.

"I remain open to modifying the new deepwater drilling suspensions based on new information," Salazar said in a statement, "but industry must raise the bar on its practices and answer fundamental questions about deepwater safety, blowout prevention and containment, and oil spill response."

According to the statement, a temporary deepwater drilling pause will provide time for operators to demonstrate "that they have the ability to respond effectively to a potential oil spill in the Gulf, given the unprecedented commitment of available oil spill response resources that are now being dedicated to the BP oil spill."

Finally, it will allow for additional "collection and analysis of key evidence regarding the potential causes of the April 20 ... explosion and sinking of the Deepwater Horizon" rig that killed 11 workers and led to the worst environmental disaster in U.S. history.

Oil companies and many Gulf state politicians and residents vehemently opposed the first moratorium, arguing it was unnecessary and would damage a regional economy still reeling from Hurricane Katrina.

However, Democratic Sen. Bill Nelson of Florida said Monday that a suspension of deepwater drilling was the right step for now.

"Until we know what happened with the Deepwater Horizon, and we'll know very soon, it makes sense not to put Gulf coast residents and the economies there at further risk," Nelson said in a statement.

Last month, U.S. District Judge Martin Feldman issued a preliminary injunction against the ban, which halted all Gulf of Mexico drilling in more than 500 feet of water and prevented new permits from being issued. The government appealed the ruling and asked for an emergency stay of Feldman's decision while the case continued.

On Thursday, a panel of the 5th U.S. Circuit Court of Appeals rejected the government's request, saying it had "failed to demonstrate a likelihood of irreparable injury if the stay is not granted."

The ruling also said there was no evidence that deepwater drilling would resume immediately as the case goes on, but the appellate judges said the government can apply for an emergency halt to any drilling that it can show "has commenced or is about to commence."

In a background document accompanying Salazar's statement, the Interior Department said the difference between the original moratorium and the suspension order Monday involved "new evidence regarding safety concerns, blowout containment shortcomings within the industry, and spill response capabilities that are strained by the BP oil spill."

"The May 28 moratorium proscribed drilling based on specific water depths; the new decision does not suspend activities based on water depth, but on the basis of the drilling configurations and technologies," the document said. It specified that drilling was suspended on any operation involving a blowout preventer -- the fail-safe mechanism for stopping an oil well explosion like the one that caused the Gulf disaster -- positioned underwater or on a floating rig in the Gulf of Mexico and the Pacific region.

According to the background document, inspections of blowout preventers on new relief wells being drilled to try to stop the broken well gushing oil into the Gulf found several problems that required repairs.

"Because these problems were identified by the new testing procedures, they were repaired, and the tests were successfully re-run," the document said, adding that the Interior Department was "closely monitoring the drilling of the relief wells to ensure safety."

Salazar's suspension order does not apply to "production activities" and drilling necessary to help stop the Gulf oil leak, as well as some other activities, the document said.

"To date, and despite assurances from the White House and the Interior Department, about one-third of the shallow water fleet has been idled by the application of what can only be called a de facto moratorium," said Jim Noe, senior vice president and general counsel of Hercules Offshore. "Unless Interior changes course, and matches their action with their rhetoric, another third of the fleet will be idled and thousands more workers will be furloughed within the next few weeks."