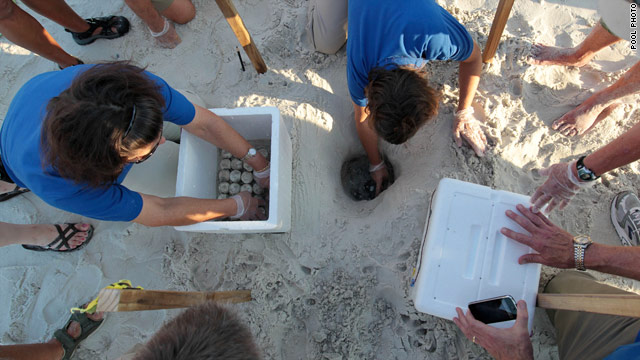 Port St. Joe, Florida (CNN) -- One by one, with a hand as steady as a surgeon's, Lorna Patrick removes eggs from a sea turtle's nest on a Florida beach.

"If it falls, you probably killed the hatchling that's developing inside," said Patrick, a biologist with the U.S. Fish and Wildlife Service.

Patrick admits she holds her breath each time she takes an egg out of the sand and places it in the foam cooler.

Sand is delicately placed in the cooler between and on top of each egg. Patrick uses the sand from the nest, which is located just a few inches from the beach's surface.

This process is part of an unprecedented sea turtle relocation program. Moving sea turtle nests days before the eggs are to hatch has never been done before.

It is also the first time that wildlife experts had to deal with oil gushing into the Gulf of Mexico.

"Shy of letting the hatchlings swim in oil, it's our best alternative," said Sandy MacPherson, the national sea turtle coordinator for the Fish and Wildlife Service.

"We're confident if they go into oil they're going to die."

Patrick is working on the second sea turtle nest to be moved since the program started. Ninety percent of the United States' sea turtle population can be found on Florida's beaches, according to the U.S. Fish and Wildlife Service.

It is estimated that 700 nests can be found in the Florida Panhandle, an area vulnerable to the oil spill.

"This is a huge relocation effort," said Thomas Strickland, assistant secretary of interior for fish and wildlife and parks. "As many as 50 to 100,000 eggs over the next six to eight weeks will be dug up."

An average nest has anywhere from 100 to 120 eggs. Sea turtles come out of the water a few feet from the coastline and lay their eggs in the warm sand.

Loggerhead turtle eggs, the type Patrick is handling, usually hatch within 60 to 70 days. The eggs are moved just over a week before they are expected to hatch.

Wildlife officials want to keep the eggs in their natural environment as long as possible.

"Through the eggs it's believed they actually connect to the landscapes where they were born," Strickland said.

Once the turtles mature it is hoped that they will return to the original nesting area and the natural birthing cycle will continue. Once Patrick's two coolers are full, with the nest's 107 eggs, they will start a journey across the state.

A special climate-controlled truck donated by Federal Express will deliver the eggs to the Kennedy Space Center in Florida.

The coolers will be stored in a special NASA building that will be regulated to the warm summer temperatures to which the eggs are accustomed.

Instead of the beautiful white sandy beach, the hatchlings will be born in the transport coolers.

Once they break out of their shells, the warm blue Atlantic Ocean will be awaiting them.