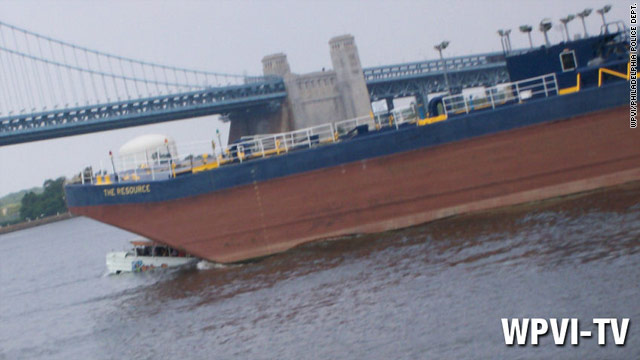 A barge hits a tour boat Wednesday on the Delaware River in Philadelphia, Pennsylvania.
STORY HIGHLIGHTS

(CNN) -- A body was recovered in the vicinity of a boat accident in the Delaware River, a Coast Guard spokeswoman said Friday.

Two passengers -- a 16-year-old girl and a 20-year-old man -- went missing in that area after a tour boat collided with a barge on the Delaware River in Philadelphia, Pennsylvania on Wednesday.

The Coast Guard would not say definitively Friday that the body recovered was one of the two victims, waiting for the body to be positively identified by the Philadelphia Medical Examiner.

Rescuers saved 35 people who were on the "Duck" boat at the time of the crash.

The tour boat had a clean record, said the president of Ride the Ducks, who traveled to Philadelphia from the company's headquarters in Norcross, Georgia.

"I can tell you this boat has been inspected frequently. Twice daily. We've never had a problem with this boat," said Chris Herschend.

The company voluntarily shut down its nationwide operations, including Stone Mountain Park, Georgia; Branson, Missouri; and San Francisco, California. "What we hope to learn [is how] to prevent this from ever happening again," Herschend said.

"The immediate response was amazing," said U.S. Coast Guard Capt. Todd Gaitlin. "The private citizens helped [rescuers] get people out of the water."

Lt. Frank Vanore of the Philadelphia Police Department told reporters Wednesday that the boat had "mechanical trouble" and the engine shut down after a fire on board. While the boat was in the river and waiting for help, it was hit by a barge, he said. The boat overturned and passengers were spilled into the river.

The investigation will include reviews from cameras along the river, training and navigation methods and safety equipment.

"We want to find out what happened and issue safety regulations so that this does not happen again," said Sumwalt, who is vice chairman of the NTSB.

Alcohol tests on crew members came back negative, Sumwalt said. Drug tests will take longer to analyze. The 10 investigators will also look at allegations that similar boats have previously overheated or had mechanical problems.

Herschend said the company is investigating and assisting fire and police officials.

"I believe this was an accident."

He said he could not speculate on whether there was a fire onboard or how the boat's captain communicated during the incident. But he said he believes the unidentified captain followed all procedures. He was unsure how long the boat was dead in the water before the collision.

Asked by reporters Thursday whether the barge was at fault, Herschend said, "I don't want to speculate. For me it is not to assign blame."

He said the 10-year-old craft had portable flotation devices.

Herschend said the company is checking on whether the captain told people to jump off the boat moments before impact. "It is my expectation for the captain that he followed our emergency procedures to the letter," he said.

"Our first priority is the people on board," Herschend said. "Then we are going to work on making sure this never happens again."

The missing people are believed to be from outside the United States, he said.

Searchers located the boat in about 50 feet of murky water, but it was too dangerous to send divers down, said William Blackburn, deputy commissioner of the Philadelphia police. The boat is upright on the bottom of the river, Blackburn said.

The "Duck" boats are amphibious military vehicles designed in the 1940s.

The NTSB will also conduct a 72-hour history to determine the mental and emotional state of the crew of boat vessels, Sumwalt said.

The company, Ride the Ducks, is owned by Herschend Family Entertainment.

The company's website posted this message Thursday: "Our thoughts and prayers are with our Philadelphia tour guests, crew members and their families. We are attending to their needs first. In the interim, we have voluntarily suspended our Ride The Ducks operations nationwide. If you already have a reservation, you can receive a full refund or reschedule for a future date. We will resume operations shortly."

CNN's Sarah Hoye and Cassie Spodak contributed to this report.