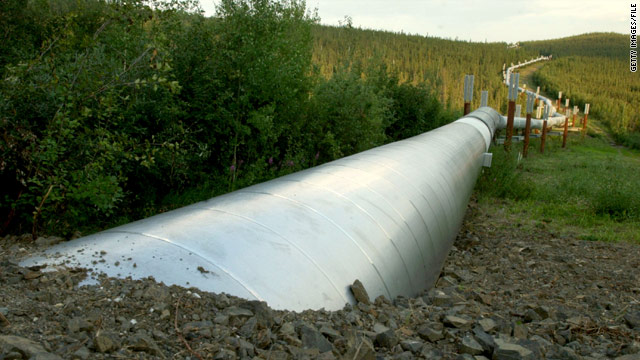 The Trans-Alaska Pipeline emerges a few miles north of the Yukon River in Fairbanks. It carries oil to the southern port of Valdez.
STORY HIGHLIGHTS
RELATED TOPICS

Washington (CNN) -- -- The head of the company that operates the Trans-Alaska Pipeline announced his retirement Wednesday after criticism by a congressional committee and the internal watchdog unit of majority owner BP.

Kevin Hostler will step down as CEO of Alyeska, the BP-dominated consortium that operates the 800-mile pipeline, on September 30, the company announced.

"Retiring at the end of September is good for the pipeline, and it allows enough time for a proper transition," Hostler said. "Our executive team and other Alyeska leaders have worked toward developing leadership skills so that any transition in the organization is seamless."

The company said Hostler had previously discussed plans to retire by the end of the year. But a senior federal government source and another source with knowledge of the matter described his departure as a resignation, while the chairman of a congressional investigative subcommittee described Hostler's move as "early retirement."

"In our committee staff's meeting with Mr. Hostler last week, we expressed serious concerns about a recent internal report showing significant issues with the management culture at Alyeska," Rep. Bart Stupak, D-Michigan, said in a statement following the news. "That report found widespread dissatisfaction among employees of Alyeska regarding decisions made by management and the management style within the company. Mr. Hostler's early retirement does not come as a surprise, and I wish him the best in his retirement."

Stupak said the report found "significant issues" regarding safety and morale among workers on the pipeline, which stretches from Alaska's North Slope to the southern port of Valdez. He called on BP and the four other companies involved in Alyeska to take those findings "very seriously" and replace Hostler with "someone with the character and management style to move the company forward."

Stupak leads the investigative subcommittee of the House Energy and Commerce Committee. The panel has been examining allegations by several pipeline managers that stringent cost-cutting measures have put the integrity of the pipeline at risk, government sources told CNN's Special Investigations Unit. And some BP managers have criticized Hostler's cost-cutting efforts, alleging they have resulted in a large backlog of deferred work projects on the pipeline, sources at BP's internal watchdog agency said.

In addition, Hostler moved more than two dozen BP managers from Fairbanks, which is more convenient to pipeline operations, to offices in Anchorage. A source at BP's Ombudsman Unit says that move alone was expected to save Alyeska about $4 million in real estate costs in Fairbanks.

Hostler has "been under a lot of scrutiny," said one source.

Hostler spent 27 years with BP prior to being named CEO of the pipeline, most recently as the company's senior vice president of global human resources. He became Alyeska's CEO in 2005, and the company said its injury rate has gone down and its safety performance has gone up on his watch.

BP owns 80 percent of the pipeline. The company has been under fire since one of its deepwater wells in the Gulf of Mexico exploded and sank in April, uncapping a gusher a mile underwater that has become the worst oil spill in U.S. history.

The disaster has put new scrutiny on the company's safety and environmental record, which includes a 2006 Alaska pipeline spill that dumped 200,000 gallons of crude onto the tundra. Federal investigators found the company ignored warning signs before the spill, the largest ever on the North Slope.

The company pleaded guilty in 2007 to one count of criminally negligent discharge of oil, a misdemeanor, and paid $20 million in penalties and restitution. The Justice Department also filed a civil complaint in 2009 that accused the company of violating clean air and water laws in Alaska.