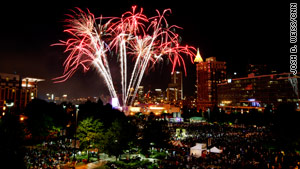 Fireworks light up the sky over Atlanta, Georgia, on Sunday night.

(CNN) -- From sea to shining sea, as the song goes, Americans celebrated Independence Day in a variety of ways Sunday, from the traditional barbecue to a decades-old hot dog eating contest at New York's Coney Island.

At the White House, President Barack Obama marked the holiday with a barbecue for 1,200 members of the armed forces and their families, an out-of-uniform event for the the troops.

"The backyard's a little bigger here, but it's the same spirit," Obama said.

Sunday marked the 234th anniversary of the Declaration of Independence of the 13 British colonies that later formed the United States. Obama said the "timeless" principles of that document "are just as bold and revolutionary as when they were first pronounced."

"On this day that is uniquely American, we're reminded that our declaration, our example made us a beacon around the world," Obama said from a balcony draped with red-white-and-blue bunting.

In addition to the barbecue and an opportunity to watch the fireworks over the National Mall, Obama and first lady Michelle Obama hosted a USO concert on the South Lawn. Outside the presidential mansion, tens of thousands gathered on the Mall to watch Sunday night's fireworks and hear a concert that featured performances by David Archuleta, Lang Lang, Gladys Knight, Darius Rucker and Reba McEntire.

"It's a huge honor for me to be here in Washington, D.C., to be performing on the Capitol lawn on the Fourth of July," McEntire told CNN.

The performances and the fireworks were televised on PBS.

"This is a wonderful event. It's really great to see people who come from all parts of the world and don't know what it is all about, but they're excited, because we as Americans are excited about the event," said Judy Ayars of Marshall, Virginia.

At the National Mall, visitors reflected on what the Fourth means to them.

"It is the day America got our independence from the British. We're a free country. We're not under tyranny, it feels good to be our own leaders," Kia Dawkins of Upper Marlboro, Maryland said.

Karl Simpson, also from Upper Marlboro said, "It means family time because this is when all my family gets together."

There was some intrigue behind this year's Nathan's Famous Fourth of July International Hot Dog Eating Contest. Takeru Kobayashi, who took home six consecutive titles from 2001 to 2006, did not be participate in the challenge this year because of a contract dispute with Major League Eating. He watched from the stands.

Joey Chestnut won the contest Sunday, held in Coney Island, New York. He consumed 54 hot dogs and buns in 10 minutes. The win, Chestnut's fourth straight, was short of his 68-hot dog record set last year. Meanwhile, police said Kobayashi was arrested after the event on charges of resisting arrest, interfering with a police officer and disorderly conduct after he tried to make his way on stage after the event.

For the more health conscious, the 41st annual Atlanta Journal-Constitution Peachtree Road Race 10K in Atlanta, Georgia -- which attracts avid runners from across the world -- served as Fourth of July alternative. About 55,000 runners hit the pavement Sunday morning over the course that took them through the city streets of Atlanta.

Gebre Gebremariam of Ethiopia won this year's race in a photo-finish, beating Kenya's Peter Kirui with a time of 27 minutes, 56 seconds, the AJC reported.

Not all Independence Day celebrations were on U.S. soil.

Vice President Joe Biden, on a visit to Iraq, gave a speech at a nationalization ceremony for troops at Camp Victory. U.S. service members at the ceremony represented about 60 countries where they were born before becoming U.S. citizens Sunday.

"I can't think of a more stirring example of patriotism than men and women volunteering ... to fight for their country, to put their lives on the line, and some of your brethren, having lost their lives and limbs, to fight on foreign soil for their adopted country. You're remarkable," Biden said.

Biden continued, "On this Fourth of July weekend, I'm reminded that you have carried the torch of our Founding Fathers, the one that they lit 234 years ago, you carried it around the world, in this case into a nation that's not your own, in a uniform representing a nation that, until now, was not your own."