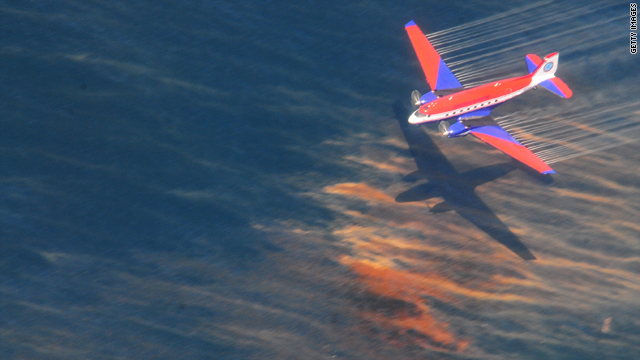 New Orleans, Louisiana (CNN) -- Chemical dispersants keep flowing into the Gulf of Mexico at virtually unchanged levels despite the Environmental Protection Agency's order to BP to "significantly" scale back, according to a CNN analysis of daily dispersant reports provided by the Deepwater Horizon Unified Command.

When the May 26 directive was issued, EPA Administrator Lisa Jackson said dispersant use should be cut by 75 percent.

Public statements at the time made by the EPA administrator gave the impression that federal officials were trying to cut down overall dispersant use.

"We expect to see a substantial reduction in the overall amount of dispersant used," Jackson said in May.

Before May 26, BP used 25,689 gallons a day of the chemical dispersant Corexit. Since then, CNN's analysis shows, the daily average of dispersant use has dropped to 23,250 gallons a day, a 9 percent decline.

Gulf Coast environmentalists say it's another sign that the federal agencies monitoring dispersant use are not being tough enough with BP.

"I think the EPA has been struggling to respond to this crisis," said Aaron Viles with the Gulf Restoration Network. "It's all really a giant science experiment and we're terribly concerned that in the long run the impacts are going to be significant and we really don't know what we're doing to the ecosystem."

But the EPA argues it deserves credit for getting alarming dispersant use under control. The directive states that BP must ramp down dispersant use by "75 percent from the maximum daily amount used."

And that's the catch. The highest recorded amount of dispersant used occurred on May 23, when 70,000 gallons were injected into the Gulf of Mexico. EPA officials say they feared that number would have become the norm and that's why, they say, the directive was issued.

"This escalation was quickly reversed, ensuring BP only uses the lowest volume of dispersant needed," said Adora Andy, a spokeswoman for the EPA.

But even by the EPA's own standards, BP still routinely exceeds the daily threshold. The EPA and Coast Guard say they're trying to keep dispersant use to around 18,000 barrels a day.

But according to CNN's analysis, BP has gone over that amount 50 percent of the time since the May 26 directive was issued. To do so, BP must request permission from the U.S. Coast Guard.

Coast Guard officials say dispersant use is "evaluated daily" and that it's using the "safest and most effective methods available" to protect the sea environment.

"The EPA-Coast Guard directive has been successful in ensuring that BP uses the lowest volume of dispersant necessary," U.S. Coast Guard Lt. Erik Halvorson, a spokesman with the Unified Area Command.

The EPA continues testing the chemical dispersant Corexit 9500, which has been used by BP since the beginning of the oil disaster. So far more than 1.6 million gallons of the chemical have been injected into the Gulf of Mexico.

But the struggle over daily dispersant use has caught the eye of Rep. Ed Markey, D-Massachusetts, one of the loudest critics of BP's response in cleaning up the oil spill.

"I think it is obvious we can never again allow for a repetition of what is happening right now, where the science experiment is being conducted without having any idea what the impact on marine life long term will be," said Markey.