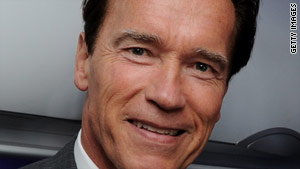 Gov. Arnold Schwarzenegger has called for the salary for state workers to be cut to an hourly rate of $7.25.
STORY HIGHLIGHTS
RELATED TOPICS

(CNN) -- As many as 200,000 state workers in California could see their pay scale slashed to minimum wage, if orders from the governor's office are followed.

In a letter to the state controller Thursday, Gov. Arnold Schwarzenegger's administration ordered the department to reduce the payment of state workers to the hourly rate of $7.25 unless a budget is reached soon.

"These are preparations for the prospect of not having a budget passed this month," said Lynelle Jolley with the California Department of Personnel Administration.

Without a budget, the July payroll, sent to go out the end of the month, would be cut, she said.

"This is not a scare tactic," she said. "This is based on a very real legal requirement."

The legal requirement was ordered in 2003, when the California Supreme Court ruled that the state controller had no legal authority to pay wages in the absence of a budget.

"His role is to process the payroll that we give him," Jolley said.

But the state controller disagreed.

"I will not be following the governor's orders," John Chiang told CNN Radio, calling the governor's actions dangerous. "I don't understand why we would continue to impose greater hardships upon the good workers here in California and delay the economic recovery that needs to take place as soon as possible.

"It's my responsibility to protect the state's pocketbook," Chiang said, "and even though the governor is trying to fix a budget, he understands that he had that opportunity, he still has that opportunity, and he should not put people in harm's way."

Chiang said he is willing to work with the governor to come up with a better solution.

The wage cut directive would not affect state employees who already have a contract, Jolley said.

"Thirty-seven thousand employees are under a contract that protects them, and the state is currently in negotiations with its largest state employee union, the Service Employees International Union," she said.

If the governor's order is followed, the pay cut would take effect this month, according to Jolley. The workers will get their missed wages once a budget is enacted, she said.