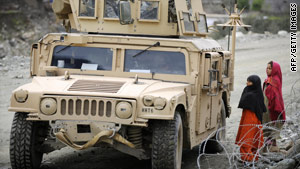 The senior U.S. commander in eastern Afghanistan has restricted the use of Humvee vehicles in the field.
STORY HIGHLIGHTS

Washington (CNN) -- The once-ubiquitous Humvee may become a rare sight in some parts of Afghanistan following a decision by the senior U.S. commander in eastern Afghanistan to restrict the use of the vehicles in the field.

Maj. Gen. John Campbell, commander of Joint Task Force-101, ordered this week that the use of Humvee vehicles outside a military base would have to specifically be approved by a colonel -- one of the most senior field grade positions in the military.

Prior to this, the use of High Mobility Multipurpose Wheeled Vehicles (HMMWV, or Humvee) had to be approved by a lower-ranking officer, according to Task Force spokesman Maj. Patrick Seiber.

Seiber said the decision was not specifically in reaction to a number of deadly IED attacks on troops in recent weeks, but is part of trying to improve protection for the force. The Humvee is heavily armored, but its flat bottom and low-to-the-ground profile has made it particularly vulnerable to attacks using improvised explosive devices, or IEDs. In recent years, the military has fielded a new series of armored vehicles with V-shaped hulls to deflect the blast of roadside bombs, but even some of those have been destroyed in large-scale attacks.

Campbell's decision comes amid the release of figures showing that June has been the deadliest month of the war for the coalition across Afghanistan, with 101 coalition troops killed and about 400 U.S. troops wounded.

Casualties due to IED attacks continue to skyrocket. The Pentagon reports that in May 2010, the latest data available, the number of coalition forces -- including Afghans -- that were killed or wounded by IED attacks was 284, more than double the 104 killed or wounded in the same month last year. The number of overall IED attacks reached 1,128, compared to 513 in May 2009. The Pentagon statistics on IEDs include Afghan troop casualties because those units are suffering very high attacks rates, according to the Pentagon.