Dispersants appear to break up in Gulf, EPA says 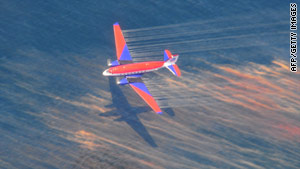 The crew of a Basler BT-67 fixed wing aircraft releases oil dispersant off the shore of Louisiana in May.
STORY HIGHLIGHTS
RELATED TOPICS

(CNN) -- The dispersant used on the massive Gulf of Mexico oil spill appears to be breaking up within weeks and is less toxic than similar products, according to preliminary testing by the Environmental Protection Agency.

Paul Anastas, the agency's assistant administrator for research and development, told reporters Wednesday the agency is making no new recommendations until further tests are conducted. But he said there is no sign that dispersants are remaining in the water or settling to the bottom, and that the Corexit 9500 being used by oil company BP is among the least toxic to small fish and mysid shrimp of the eight products tested, Anastas said.

Mysid shrimp are a tiny type of shrimp commonly used in tests of toxins in seawater.

Anastas said all the dispersants tested are "not without toxicity," and the studies have not examined the effects of the biodegraded products or of the combination of dispersants and the crude oil that has been gushing into the Gulf since late April.

But a New Orleans-based environmental group is expressing qualms about the dispersant and the massive amounts being dumped in the Gulf.

"This has never been done, this kind of volume, this kind of application," said Aaron Viles of the Gulf Restoration Project. "It's all really a giant science experiment, and we're terribly concerned that in the long run the impacts are going to be significant, and we really don¹t know what we're doing to the ecosystem."

The group is calling for an immediate end to BP's use of dispersants in the Gulf.

"We're two months into this disaster, two months plus. So it seems like we'd start to have some answers by now as to what the better alternatives are," Viles said. "We're very concerned that BP is using a product that they know that they have on hand, and that they're not really being challenged to use better products."

The EPA ordered BP to sharply cut back its use of Corexit in May amid concerns about its safety. It initially tried to force BP to use another dispersant on the spill, but the company said no safer products were available in large enough quantities.