Man arrested after wife writes to Obama asking for help 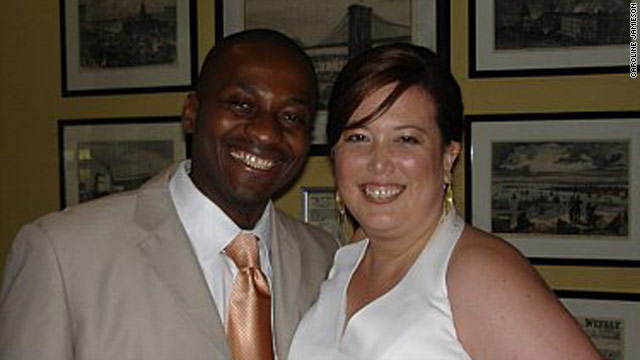 New York (CNN) -- Not everyone expects a response when they write a letter to the president of the United States. But Caroline Jamieson got much more than she expected when her husband ended up in jail and afraid he would be deported.

Jamieson, vice president of marketing at a new-media advertising company, wrote President Barack Obama in January because her husband, Hervé Fonkou Takoulo, was facing deportation to his native Cameroon. Takoulo failed in a bid before political asylum almost a decade ago, and a judge issued a deportation order after they were married.

After he and Jamieson married on 2005, Takoulo applied for a green card based on his marriage to a U.S. citizen. But immigration law requires that the deportation order be lifted before the couple can appear before immigration officials to argue their case that the marriage is legitimate and not a ploy to legalize Takoulo's presence in the United States.

"We want to be given the chance to interview and prove that we are a married couple, so Hervé can get a green card, and that has proven extremely difficult to do," Jamieson told CNN.

They never received a direct response to the letter. But they did get two Immigration and Customs Enforcement (ICE) officers waiting outside their East Village, Manhattan apartment on June 3 when Takoulo was leaving the apartment to go to the gym.

Jamieson told CNN that the officers cornered her husband and asked him if he had written a letter to the president. "He said 'No, but my wife did.' And they explained that with that letter -- when it was brought to their attention -- that the Obama administration wanted them to resolve this quickly,'" Jamieson said.

Her husband was held at ICE headquarters for six hours, alone in a room, until he was chained at the wrists, around his stomach and his ankles and taken to the Hudson County Correctional Center in New Jersey, she said.

For the next two weeks, a frantic Jamieson wrote letters to politicians and anyone else who might be able to help. She got responses, she said, but none seemed to lead anywhere. Takoulo was allowed to call his wife once a day at designated times but he knew little about his situation. He spent his days with repeat sex offenders and men accused of felonies, fearing imminent deportation.

"I did everything I could and went into survival mode and pushed for all these connections to the press," she said. "We are fortunate to have that leverage. What about the people in the country who don't have access to those means?"

Then, on Thursday, he was brought to an immigration processing jail in Manhattan and released. There was no explanation offered for his release, but Takoulo is now wearing an electronic ankle monitor while his case is being reviewed.

ICE spokesman Brian P. Hale said the circumstances of Takoulo's arrest were undergoing an internal review and he was released as "an alternative to detention pending a review of his case."

Investigators are looking to determine whether "appropriate separation" between Jamieson's letter to the president and Takoulo's deportation case were violated. If so, he said, the case will go to the ICE Office of Professional Responsibility and the Homeland Security Department's inspector general for "immediate and appropriate action."

Takoulo graduated from the State University of New York at Stony Brook with an engineering degree in 2008 and received several job interview offers after graduation. But the deportation order hung over his head and prevented any followup.

"All he wants to do is contribute to this economy," Jamieson told CNN. "We want to be a productive couple. He's been dying to work."

The couple has been following Barack Obama's rise in the political world since 2004.

"I felt a special kinship to him because I'm of mixed race, and my husband obviously has a similar background," Jamieson told CNN.

Regardless of whether or not her letter was mishandled, the incident has deeply affected the couple's faith in the Obama administration.