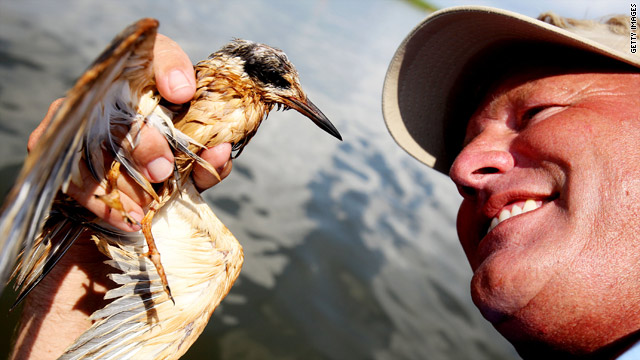 (CNN) -- BP said Saturday that it has paid $104 million to residents along the Gulf Coast who have filed claims related to the Gulf oil spill.

The company said it has issued more than 31,000 checks in the past seven weeks.

But earlier Saturday, as oil recovery efforts continued throughout the region, one Louisiana official tried out a new device of his own on: a reversible drum vac that he ordered online for $400.

Within 15 minutes, he said his crews had collected 55 gallons of oil and Nungesser -- vocally frustrated by the response from BP and the federal government -- was thinking about whipping out his credit card to pay for more pumps from an online site.

BP issued a press release Saturday detailing its response to Gulf residents affected by the spill. The company said it has received about 64,000 claims so far, and the average time from filing a claim to checks being issued is four days for individuals and seven days for "more complex business claims that have provided supporting documentation."

The company said a 1,000-member claim team is working in 33 field offices in Louisiana, Mississippi, Alabama and Florida. Some 84,000 calls have come in on a toll-free claims line, BP said.

A venting device aboard the drilling ship was not working properly, said Ayla Kelley, spokesperson for the Deepwater Horizon command center. Other recovery efforts continued during the time that the Discoverer Enterprise was idled, she said.

She said the problem was with a blocked flame arrester, designed to prevent oil from combusting. Collection on the Discoverer Enterprise resumed Saturday morning after a subsequent delay caused by a lightning storm.

BP said it was able to capture roughly 24,500 barrels -- just over 1 million gallons -- of oil Friday, a little less than it captured the day before.

Meanwhile, Tony Hayward, the beleaguered company's equally beleaguered chief executive officer, was also on the water Saturday -- but not anywhere near the Gulf.

After being lambasted in Congress on Thursday, Hayward was spending the weekend with his family in Britain's Isle of Wight, said company spokesman Robert Wine.

On Saturday -- Day 61 of the oil disaster -- Hayward was watching his yacht, a Farr 52 named Bob, compete at the tony J.P. Morgan Assessment Management Round the Island Race -- an act likely to spark more public outrage for the company and its chief.

"That's so typical. Judging from the comments he's made all along, did you expect anything different?" Nungesser said.

Nungesser said he didn't buy one word of Hayward's testimony before a key House subcommittee, his first appearance on the Hill since April 20, when an the Deepwater Horizon rig exploded and triggered the massive oil spill.

Lawmakers wanted to know if BP had cut corners in an effort to save money in the run-up to the explosion, focusing on the well's design and measures taken while BP was attempting to seal it before it exploded.

Hayward repeatedly answered that he wasn't involved in those decisions or did not recall.

The seven-hour-plus hearing came a day after Hayward and other top BP officials met with President Obama's disaster team in the White House and announced a $20 billion escrow fund to help compensate victims.

After the session, BP Chairman Carl-Henric Svanberg said his company cares about the "small people" impacted by the oil. He later apologized for the remark but it was a continuation of public relations gaffes for the oil company that began with Hayward saying the spill would be "modest" and that he wanted his life back.

"We need to take decision-making away from BP," Nungesser said. "We need to do everything we can to fight this disaster."

As much as 60,000 barrels a day may be gushing into the Gulf, new estimates found this week, and many Americans reached out to do what they could to help.

One of them was comedian Stephen Colbert, host of "The Colbert Report," who along with Bing.com started a charitable fund with a donation of $100,000. The Colbert Nation Gulf of America Fund will be used to help people and wildlife affected by oil.