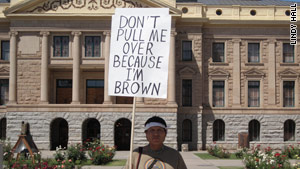 A man protests outside the Arizona state capitol earlier this month.
STORY HIGHLIGHTS

(CNN) -- Obama administration lawyers are planning to file a legal challenge to a controversial Arizona immigration law within a month, according to a senior administration official.

Federal government lawyers who have been working on the expected challenge for several weeks will most likely file their arguments in federal court in Phoenix in the days leading up to July 28, when the statute is scheduled to take effect, the official said.

Although the Justice Department indicates no final decisions have been made at this point, officials were put on the spot when Secretary of State Hillary Clinton said in a recent television interview in Ecuador the government "will be bringing a lawsuit" in the case.

Administration officials have indicated the question of Arizona usurping federal authority to control the border and enforce immigration law is the most likely federal point of attack against the state law signed by Gov. Jan Brewer earlier this year.