Stay out of the way on beach protection, Florida county tells feds 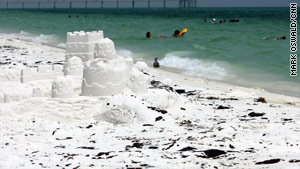 Okaloosa Island, Florida (CNN) -- If you live in Okaloosa County, Florida, or Destin on Florida's Emerald Coast and are wondering who's going to be calling the shots if black crude oil comes ashore -- wonder no more. It won't be the federal government.

"When you're down in the trenches trying to respond like we are, it doesn't work," he said.

The Okaloosa County Commission voted unanimously this week to allow their emergency managers to override and overrule federal emergency managers and take on the responsibility of saving the sand and beaches that provide about 50 percent of their economy. Tourist bookings are down about 30 percent this summer, according to local officials.

"This is our home, and in my home I have responsibility to take care of what is necessary around my home," said Okaloosa County chairman Wayne Harris.

"I certainly don't expect someone from across the U.S. to come and save the day for us," he said.

But they did wonder if they'd be going to jail for defying the federal government's cleanup operation.

"We knew that was the possibility," Harris said.

"In fact the Coast Guard had told us that, 'Commissioners, if you do that there's a potential you would go to jail,' and we said, 'Well, so be it, but we gotta protect our waterways and our people,'" he said.

But on Wednesday, the National Incident Command told the county it could take control of the defense of its shores.

"We're not looking to get into an argument, but there is an overriding federal interest in those waterways, and the safety of those waterways is the responsibility of the Coast Guard," said Adm. Thad Allen, the national incident commander.

Video: Florida county fights feds for cleanup
This is our home, and in my home I have responsibility to take care of what is necessary around my home.
--Okaloosa County Chairman Wayne Harris
RELATED TOPICS

"We need to sit down, have open dialogue and conversation to arrive at effects we want to achieve," he said.

So far, the area on Florida's panhandle has seen only weathered oil in the form of tar balls and tar mousse, but Okaloosa County, along with the city of Destin, have agreed to move forward with a unified plan to protect their beaches and waterways. They say they'll be spending about $5 million per month to protect their land, and they have one message to the feds.

"Have our backs. Let us go out and do our jobs," Villani said.

"We've got to protect the public," he said.

Florida had the luxury of being able to sit on the sidelines for a while as the gushing crude meandered around the Gulf of Mexico, plaguing beaches in Louisiana, Mississippi and Alabama. With constant criticism of the Obama administration's response to the spill, this small part of Florida may have just opened a political can of worms, especially if oil begins to push east. Will other counties also want to take over their local battles against crude?

"I certainly hope they do," Harris said. "That's what you're paid for or that's what your responsibilities are when you are the leader."