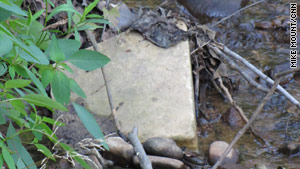 Washington (CNN) -- Workers at Arlington National Cemetery have removed discarded grave stones that were lying in a stream bed for years until discovered by a Washington Post reporter this week.

The discovery is further embarrassment for the nation's most prominent cemetery for veterans, which just last week was revealed to have misidentified or mislabeled over 200 veterans' graves.

A spokeswoman at Arlington confirmed that one of the gravestones had a name on it, although the name was not released.

Dozens of discarded headstones apparently were being used to shore up a small stream in a remote corner of Arlington National Cemetery while other headstones lay in the stream itself partially covered in mud and stones and weeds.

Cemetery officials do not know exactly how long they have been there.

"It appears that they are preventing erosion in the creek bed, however we won't know more until we get in there," to look into the matter more said Kaitlin Horst, the spokeswoman for Arlington National Cemetery.

Cemetery officials held a press conference Thursday afternoon and invited the media to look at the stream, but by then at least two of the headstones, one with a visible name on it, had been removed.

"We removed the headstones that were not holding up the stream bank or had a name on it," Horst said.

She said the one with the name was removed out of respect for the family. The cemetery contacted the family of the individual Thursday and cemetery officials told CNN the person's records are in order and a proper headstone is marking the grave location. For privacy reasons, cemetery officials would not disclose the person's full name or burial location in the cemetery, nor would they say when that person died.

During the press conference, Horst said cemetery officials were surprised by the finding. Since 1994 Arlington National Cemetery has had a policy of removing the name on a discarded headstone, breaking it up and sending it a recycling center, according to Horst.

Horst did not know what the policy was prior to 1994.

"At this point anything I would say would be speculation, prior to 1994," Horst said. "It appears that they (the headstones) are preventing erosion in the creek bed."

Horst said Cemetery officials, including the newly installed directors, have to decide what to do with the headstones. Part of that decision includes figuring out how to shore up the stream bed where the headstones have been.

The discovery comes on the heels of an upheaval of top management at the cemetery after the superintendent, John C. Metzler Jr., was punished for poor management after the discovery of numerous cases of bodies being buried in the wrong place and incorrect headstones on graves.

Metzler will retire on July 2.

Secretary of the Army John McHugh installed a new team and continues to investigate the burial errors.

"I can tell the American public that they [cemetery leadership] are very committed to doing the right thing here at Arlington they are taking this matter very seriously," Horst said.

"They are going to look into it and take any appropriate corrective action," she said.