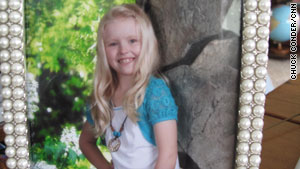 Services for Kylee Sullivan, 7, will be Tuesday morning. Sullivan was one of 19 killed by flash flooding on Friday.
STORY HIGHLIGHTS

Langley, Arkansas (CNN) -- One person remained missing Monday from last week's flash flood at an Arkansas campground that left 19 dead, and "there's still a possibility there could be others," Gov. Mike Beebe told CNN.

Rescuers found a 19th body over the weekend about half to three-quarters of a mile downstream from the campground, Arkansas State Police Capt. Mike Fletcher told reporters. Eighteen of the 19 bodies recovered so far have been identified, Fletcher said.

A wall of water swept through the Albert Pike Recreation Area before dawn Friday, when most campers were sleeping. The park is located along the Caddo and Little Missouri rivers, and the flood struck so quickly there was little chance for campers to escape, officials said.

"I don't think any of this has been a good day," Fletcher said. "I think we need to keep these families in our thoughts and our prayers." But, he said, "We're just going to keep on doing what we do and come to a conclusion on this."

More than 100 people combed the rugged woodlands of the Ouachita National Forest until nightfall Sunday, said Mike Quesinberry, the head of the rescue effort for the U.S. Forest Service. Fletcher said one searcher was overcome by heat exhaustion in Sunday's sweltering temperatures, which ranged into the mid-90s with high humidity.

Quesinberry said the last two bodies found have been in piles of wood, rock and other debris along the riverbanks, and those are now the focus of the search. Six dog teams were included in the rescue effort, and authorities were planning to bring in more dogs and new equipment, he said.

"Some of these piles are just massive amounts of rock and debris," Quesinberry said. "It's unsafe to get individuals in there with chainsaws and those type tools, so we've got heavy equipment coming in."

Funerals for two of the victims killed in the flash floods at a federal campground in Arkansas were scheduled for Tuesday.

Services for Kylee Sullivan, 7, will be Tuesday morning, while her grandmother, Julie Freeman, will be buried that afternoon, Texarkana Funeral Home Director Kendall Hudson said.

Authorities released the names of 15 of the dead Saturday, with six children among the victims, including one girl as young as 2 years old. Ages of the adult victims ranged from 23 to 69.

Several groups of people with the same last name were listed. The victims identified were largely from Texas and Louisiana, with one person from Foreman, Arkansas.

The warning system intended to notify campers on federal land about potentially devastating weather will be re-examined in Arkansas and throughout the nation, U.S. Agriculture Secretary Tom Vilsack said Saturday.