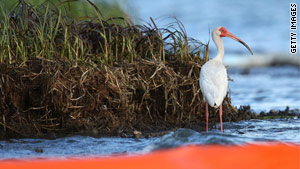 Tonight, a special edition of "AC360°," Deepwater disaster: Survivor stories. Hear from the men who survived the BP oil rig explosion. Watch "AC360°" live from the Gulf at 10 ET Friday.

It has taken more than 50 years for the plant root network holding the marshlands together at the base of the Mississippi River to form, he said at a briefing for reporters. If destroyed, the marshlands would flood and become open water, he added.

Louisiana marshland has shrunk from 3 million acres to 1.2 million acres, or 40 percent, since the turn of the century, and toxic oil would accelerate that, he said.

He said that more than 13 million migratory birds come to the Gulf marshlands each winter, though the exact number is hard to determine.

If oil enters and lingers in the Gulf marshlands through the late summer and fall, it will affect millions migratory birds that rely on marshland resources for the winter, Moorman said.

"We can't even estimate the number (of birds)," he said. "It's just that kind of a place."

It's difficult to to implement restoration efforts now when they don't know where the oil is going or what the impacts are right now, he said.

"In my career of 19 years I've never seen a situation with so much uncertainty," he said.

Ryan Lambert, a fishing tour captain for Cajun Fishing Adventures, spoke at the same briefing about watching oil wash away 29 years of knowledge learned on the job.

"My books are just red with cancellations right now," he said.

Once oil enters the wetlands, it's hard to get out so prevention is key, Moorman said. Cleanup efforts are in action in marshland areas already hit by oil, he said.

For the birds, oil could kill them quickly by covering their plumage and preventing temperature control, slowly poison them through their food supply of oysters, insects and plants, or inflict "sublethal impacts" by causing reproduction problems when they head back north for winter, Moorman said.

If necessary, Moorman said, flooding agriculture areas nearby should be considered in the hope some birds would migrate to those areas this winter. Even if they created manmade marshes, however, they can't control the birds, he said.

Lambert called for sediment deposits to rebuild the marshlands so that nature could heal itself.

Ducks Unlimited and its partners will know how to begin the restoration once the spill is stopped and damage can be evaluated, Moorman said.