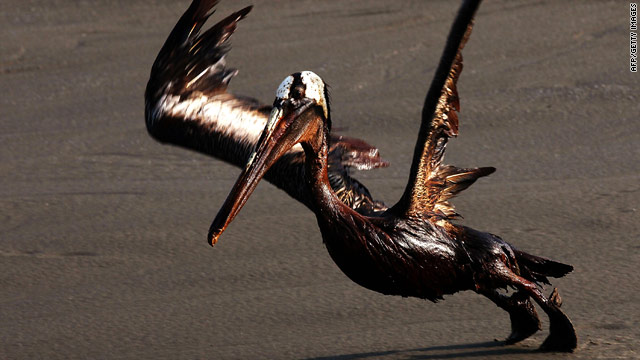 (CNN) -- Some experts see it as a well-meaning flight of fancy. To others, cleaning a bird soaked with oil from the Gulf of Mexico is the only chance it has for survival.

In the case of the brown pelican, removed last year from the endangered species list, it may be the only way to save the entire lot.

"It's like triage on a battlefield. You have to weigh where you can have your best success," said Ginette Hemley, the World Wildlife Fund's senior vice president for conservation strategies and science.

Earlier this week, a German biologist painted a less rosy picture in an interview with the magazine Der Spiegel. Silvia Gaus of the Wattenmeer National Park said it was more humane to euthanize the birds because they will suffer a painful death regardless of whether the oil is scrubbed from their feathers.

"According to serious studies, the middle-term survival rate of oil-soaked birds is under 1 percent," Gaus told the magazine. "We, therefore, oppose cleaning birds."

The statement spotlighted a similar statement in 2002 from the World Wildlife Fund, which said it was reluctant to advise cleaning birds after the Prestige spill off the coast of Spain. In that incident, a sunken tanker dumped about 20 million gallons of oil off the Galician coast.

The fund issued a statement earlier this week saying its 2002 remarks could not fairly be applied to the situation in the Gulf of Mexico, where researchers have estimated 500,000 to 1.7 million gallons a day have spewed from an underwater well. Thursday marked Day 52 of the gusher.

"In many cases, WWF believes there is value in trying to clean and rehabilitate wildlife, especially if productive, viable adult animals can recover from exposure to oil," the release said. "But every situation is different, and it is too soon to fully calculate the impact the Gulf spill will have on the long-term viability of populations of many species in the region."

Hemley said it could take up to three years to determine the spill's total impact on wildlife.

Watch whether BP is keeping workers quiet about birds

According to Wednesday's U.S. Fish and Wildlife Service numbers, rescue officials have collected 1,075 birds. Of those, 442 were alive and "visibly oiled." Another 633 were found dead, and 109 of those were visibly oiled.

The report states BP's Deepwater Horizon spill is not responsible for all dead birds.

"How long will the birds survive that have been cleaned and released? We don't know yet," Hemley said, explaining it depends on a variety of factors.

Included are the bird's age and size and the length of exposure to the oil, she said.

Lee Hollingsworth, a wildlife adviser with the Royal Society for the Protection of Birds in Wales, said other concerns are the level of saturation and how much oil a bird has ingested.

Seabirds' feathers are weatherproofed by natural oils, stimulated by a gland in their lower back. This is why birds nuzzle their tail feathers when they're preening, Hollingsworth said.

"If that gland is damaged," he said, "then that no longer secretes oil."

Holding the birds in captivity to protect them or moving them to a new habitat can be unhealthy for the bird as well, he said. Captivity is stressful, and changing a bird's environment introduces it to new prey and predators when it was accustomed to its food and enemies in its natural habitat.

Many birds are quite specialized, he said, and don't do well in artificial, foreign or zoo-like environs.

See the other eco-casualties of the oil spill

The Welsh society joined the World Wildlife Fund in 2002, saying that heavily oiled birds could not be helped, but Hollingsworth said Thursday the 8-year-old statement was specific to the situation in Spain, which happened in chilly November. The Gulf is warm, which could bode well for the birds, he said.

"The majority of [birds affected by the Prestige incident] didn't survive," he said. "That, again, is due to the ingestion of oil and weatherproofing."

Hollingsworth said many people cleaning birds are working for charities that don't receive much government funding, and it's important for such groups to prioritize their efforts and target areas where they'll do the most good.

In the Gulf of Mexico, that may mean focusing on brown pelicans. The birds, which are native to the Atlantic Coast and eastern Gulf, spent almost 40 years on the endangered species list until last year.

The chances of success increase every time we deal with one of these unfortunate situations. ... Hopefully we're getting better at this.
--Ginette Hemley, World Wildlife Fund
RELATED TOPICS

When salvaging just a few birds is so vital to the survival of a species, Hollingsworth said, "something has got to be done, and of course it's worth saving the bird."

Despite conflicting studies on the viability of washing birds, there are plenty of success stories. The International Bird Rescue and Research Center, which is working in the Gulf, cites several examples on its website.

After the 2000 Treasure spill off the coast of South Africa, rescuers saved 21,000 African penguins and released about 19,500 birds back into their colonies, according to the center.

The website notes rescuers also saved 32 snowy plovers after the 1999 New Carissa spill off the Oregon coast, 180 king eiders after a 1996 spill near Alaska's Pribilof Islands and 175 waterfowl after California's Santa Clara River spill of 1991.

"It may seem like a small number but it was significant to us, as we knew what those animals endured being covered in very heavy and thick oil," wrote Jay Holcomb, the center's executive director.

Hemley said the wildlife fund would generally "err on the side of recovering birds."

Though costs can rise when housing or relocating birds, she said it's not expensive to wash the birds, which involves rinsing them and letting them rest before scrubbing them with Dawn, the dishwashing liquid whose motto once was, "Takes grease out of your way."

Watch how Dawn works on pelicans

Rescuers are always looking to improve on their methods for saving animals, and they've learned a lot since the 1969 Santa Barbara oil spill off the coast of Southern California, she said.

"The chances of success increase every time we deal with one of these unfortunate situations," Hemley said. "Hopefully we're getting better at this."