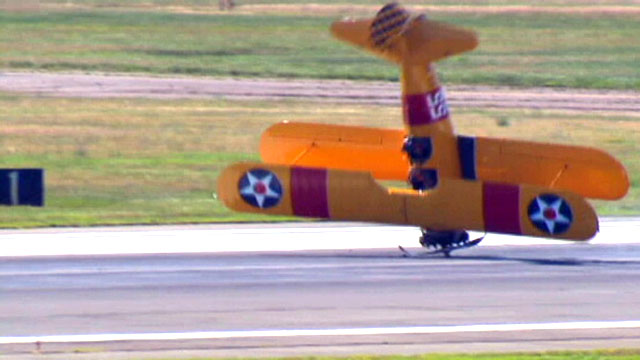 (CNN) -- An unusual movie promotion stunt threatened to turn deadly Tuesday when a World War II-era biplane flipped over while landing near the nation's capital.

Nobody was hurt, though one of the main runways at Ronald Reagan Washington National Airport was closed for roughly an hour after the crash, an airport spokeswoman said. The plane was righted by a crane.

The 1943 Stearman, a popular training aircraft during the war, was one of nine flying to Reagan National from Virginia's Manassas Regional Airport to help promote the movie "Legends of Flight," a film meant to provide a window into "a century of aviation trial and error," according to its Web site.

The two-seat, open-cockpit plane "took a back-end bounce," as it landed, movie executive producer Doug Freeman told CNN. "The pilot and passenger got out unhurt" and later relaxed over a cup of coffee.

The pilot was identified as Michael Truschel of Nokesville, Virginia -- located near Manassas. The accident occurred at the end of a roughly 20-minute flight under clear skies and light winds.

"It looked like (Michael) was up on the main gear, and then the nose went down and the tail went up," said pilot Dave Brown, who was directly behind Truschel's aircraft.

"I sidestepped (Truschel) and landed right behind him," Brown told CNN.

Air traffic controllers directed the other planes to land on another runway.

Brown told CNN that "by the time it happened, (Truschel) was going really slowly, so when it flipped over on its nose it just went on over on its top wing." The main body of the overturned plane remained high enough off the ground for Truschel and his passenger to release their harnesses and then climb out.

"It shows how rigid Boeing made the plane," Brown noted. "They were built as trainers for cadets who flipped them like this quite often."

Brown said there was damage to the tail, a wing and the prop of Truschel's plane.