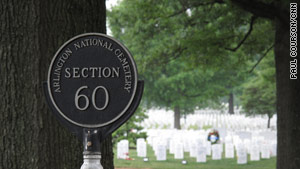 Arlington National Cemetery's Section 60 is for those soldiers who perished in Afghanistan and Iraq.
STORY HIGHLIGHTS

Washington (CNN) -- More than 1,000 American troops have now been killed in Afghanistan, according to CNN calculations.

The United States passed that grim milestone Tuesday, when an improvised explosive device killed two of its troops in southern Afghanistan, bringing the total to 1,001. The death toll does not include those killed in support of Operation Enduring Freedom in other countries.

But the large number of casualties is in sharp contrast to the rates from another recent war. The deaths of these service members come 104 months since the start of the war in Afghanistan, compared with the war in Iraq, where more than 1,000 U.S. troops were killed in the first 18 months of fighting.

But Afghanistan is getting deadlier by the day. From 2001 through 2006, the American casualty rate never reached 100 in any single year. But that number started going up in 2007 and spiked to more than 300 last year. If the current rate continues, 2010 will be the deadliest year of the war, nearly a decade after it started.

The milestone comes just 24 hours after the single deadliest day for coalition forces in Afghanistan this year. Insurgents killed 12 NATO soldiers on Monday, seven of them Americans. Officials with the International Security Assistance Force say it was no single event but six separate attacks in southern and eastern Afghanistan. It was the most fatalities among NATO troops in a single day since October 26, when 11 Americans were killed in two helicopter crashes.

Coalition forces are working to secure Helmand Province and establish a legitimate government there and are launching an offensive to target up to 1,000 Taliban fighters in Kandahar.

"We all expect the fight to get tougher as we carry out the new campaign," Defense Secretary Robert Gates said.

Added Chairman of the Joint Chiefs of Staff Adm. Mike Mullen, "I think we've been very clear for months now that this was going to be a very difficult fight in the south. And the expectations, try to set expectations ... as tragic as it is, for these losses."

A defense official says that American troops and their allies are tightening security around the city of Kandahar but that the operation there will take months and will not resemble a typical battle. More than a million Afghans live in Kandahar, and the Taliban are embedded in the population. The official says the goal will be weeding out the Taliban, as well as the drug gangs and warlords that control much of the area's economy.