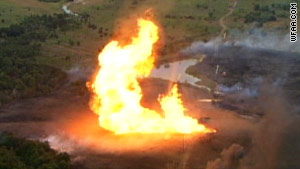 Crews couldn't get closer than 600 yards to the source of the fire in Johnson County, Texas, an official said.
STORY HIGHLIGHTS

(CNN) -- A 36-inch underground natural gas pipeline exploded into flames Monday in Johnson County, Texas, killing one and injuring at least five people before officials were able to shut the flow of gas, officials said.

Cleburne Fire Chief Clint Ishmael said all 13 workers on the crew at the site when the blast took place were accounted for and that one was dead.

"There was a crew working on the line, and they apparently ruptured it somehow and caused an explosion," Cleburne City Manager Chester Nolen said.

Nolen originally said that three people had been killed in the blast but later retracted that statement.

Flames were visible eight miles away, he said.

Video showed the site of the fire -- cattle country -- in the center of a patch of scorched grassland. No one was evacuated because no buildings were nearby, Nolen said.

The line is owned by Enterprise Products out of Houston, he said. No one at the company answered a telephone call.

The blaze was so fierce that crews could get no closer than 600 yards to the source of the fire, Ishmael said.

Five people were taken to Glen Rose Medical Center in Glen Rose, Texas, where they were in stable condition, CEO Gary Marks said.

"Our house shook, glass shook," she said. "We watched this huge plume of smoke or steam rising above our neighborhood."

But by 5 p.m. (6 p.m. ET), fire officials had turned off the valves that were feeding gas to the fire.