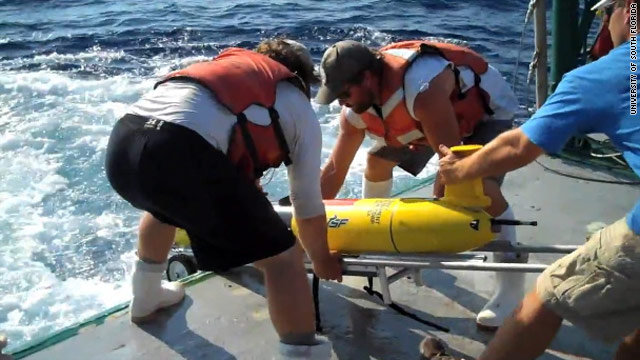 St. Petersburg, Florida (CNN) -- As if the pictures of birds, fish and animals killed by floating oil in the Gulf of Mexico are not disturbing enough, scientists now say they have found evidence of another danger lurking underwater.

The University of South Florida recently discovered a second oil plume in the northeastern Gulf. The first plume was found by Mississippi universities in early May.

"These hydrocarbons are from depth and not associated with sinking degraded oil but associated with the source of the Deep Horizon well head," said USF Chemical Oceanographer David Hollander.

Through isotopic or microscopic fingerprinting, Hollander and his USF crew were able to show the oil in the plume came from BP's blown-out oil well. The surface oil's so-called fingerprint matched the tiny underwater droplet's fingerprint.

"We've taken molecular isotopic approaches which is like a fingerprint on a smoking gun," Hollander said.

BP has not commented on the latest development but in the past denied underwater oil plumes exist.

"The oil is on the surface," said BP's Chief Executive Officer Tony Hayward. "There aren't any plumes."

Yet BP's Managing Director Bob Dudley said recently, "We're all absolutely taking these ideas seriously and looking at them."

Scientists on board the university's research vessel Weatherbird II were not able to find the dissolved hydrocarbon or oil by sight. Instead the crew received sensor signatures from the equipment deployed into the water since the plumes appear to be clear.

Are you there? Send us your photos

USF is unsure on the exact size of the plumes.

"There are indications this is fairly wide spread," said the USF oceanographer. "There is probably more than one leg of this plume."

Scientist are concerned what effect the oil, not to mention the dissolvents used to break up the oil, will have on marine life.

Laboratory tests show bacteria have begun eating some elements of the dissolved hydrocarbons. But the effect on fish "is what needs to be understood," said Hollander. "We are in uncharted territory."

Impact your world: How to help

Water samples collected by USF were sent to the National Oceanic and Atmospheric Administration labs. NOAA has yet to comment on their conclusions.

NOAA and USF will hold a joint press conference Tuesday morning at the university's St. Petersburg campus to release their final findings.