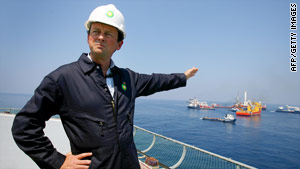 BP CEO Tony Hayward apologized Wednesday for comments he made about wanting "his life back."
STORY HIGHLIGHTS

(CNN) -- If he was unknown to the American public before, Tony Hayward is fast becoming a household name, answering rapid-fire questions about the Gulf of Mexico oil spill in newspaper stories and television shows.

On Thursday, BP's chief executive officer hit the airwaves again. This time, with a carefully crafted message of his own: "I'm sorry."

"The Gulf spill is a tragedy that never should have happened," Hayward says in commercials that began airing on national television.

" ... BP has taken full responsibility for cleaning up the spill in the Gulf," he says. "We've helped organize the largest environmental response in this country's history. More than 2 million feet of boom, 30 planes and over 1,300 boats are working to protect the shoreline. Where oil reaches the shore, thousands of people are ready to clean it up. We will honor all legitimate claims. And our cleanup efforts will not come at any cost to taxpayers.

"To those affected and your families, I am deeply sorry. The Gulf is home for thousands of BP's employees and we all feel the impact. To all the volunteers and for the strong support of the government, thank you. We know it is our responsibility to keep you informed. And do everything we can so this never happens again. We will get this done. We will make this right."

The ads are part of BP's efforts to polish its tarnished image, but marketing experts aren't so sure anything will help just yet -- not with thousands of gallons of oil still gushing out of the ruptured BP well.

"At the end of the day, the best PR and advertising in the world cannot compete with that live video stream of that oil coming out of the bottom of the sea," Chris Gidez, a former oil company public relations man, told Advertising Age magazine. "PR, advertising, community affairs, social media and communications is not going to solve the problem."

The beleaguered oil company's apology is certainly not stopping angry Americans who plan to begin a week of demonstrations Thursday in 50 cities nationwide.

It also may be too late for residents of the Gulf Coast, who were already upset with Hayward after he told reporters Sunday that he "would like his life back" from the spill.

Fishermen and shop owners affected by the spill took issue with what they perceived as a whine from the millionaire businessman.

So Hayward issued yet another apology, this time on BP's Facebook page Wednesday afternoon.

"I made a hurtful and thoughtless comment on Sunday when I said that 'I wanted my life back,' " Hayward said. "When I read that recently, I was appalled. I apologize, especially to the families of the 11 men who lost their lives in this tragic accident.

"Those words don't represent how I feel about this tragedy, and certainly don't represent the hearts of the people of BP -- many of whom live and work in the Gulf -- who are doing everything they can to make things right. My first priority is doing all we can to restore the lives of the people of the Gulf region and their families -- to restore their lives, not mine."