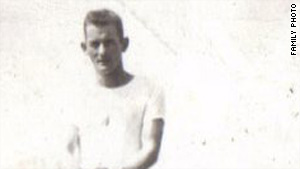 (CNN) -- What does it feel like to kill a man? James Lenihan of Brooklyn, New York, knew.

He fought in Europe in World War II and he killed a German soldier during a battle in Holland. He described how it felt in a poem.

I shot a man yesterday

And much to my surprise,

The strangest thing happened to me

I began to cry.

So begins "Murder: Most Foul," a work that echoes poetry about war in the tradition of William Shakespeare and borrows its title from the bard's "Hamlet."

As powerful as the poem is, the story behind it is also fascinating.

Sgt. James Lenihan returned home after the war, got married, had children and made a career as a salesman in the meatpacking industry.

If he ever wrote any other poems, his son Robert and daughter Joan, who still live in Brooklyn, New York, don't know of any.

In fact, they didn't know about this poem until after their father died. They found it when they were going through his possessions.

Robert and Joan Lenihan found two typewritten pages, each with a copy of the poem. It was unsigned, but Robert believes the poem was written by his father and later typed up by his mother for safekeeping.

The poem describes a killing in Holland, where Lenihan served in the 104th Infantry Division as it battled German units.

It portrays a soldier very upset about taking a life.

I knelt beside him

And held his hand --

I begged his forgiveness

But even while he describes the shooting as murder, Lenihan makes clear he had no choice.

It was the War

And he was the enemy

If I hadn't shot him

He would have shot me.

Robert Lenihan said the poem is a bit unlike the father he grew up with -- a man who could be a "tough customer" if need be, not someone tormented by a fleeting, albeit intense, moment on a battlefield in Holland.

"I'm just starting to appreciate how much he suffered only now in this part of my life. When I was a kid, like if he yelled at me or something, I'd say 'Well, Dad's being cranky,' " Lenihan said.

Lenihan said even though the incident in the poem took place more than 60 years ago, it still resonates and should be a lesson to young soldiers coming home from Iraq and Afghanistan that they aren't the first to face such emotional turmoil as this.

"That feeling they may have of regret and pain and shock of what they've done. It shows they are not alone," Lenihan said.

While Lenihan is obviously proud of his father's poem, CNN sent it to Georgetown University professor David Gewanter, who has published several books of poetry, including "War Bird" published last year.

Gewanter called the poem "accomplished." In an e-mail to CNN, Gewanter said the poem "is good, and its truths are that of experience and some literary traditions."

"I'm very deeply touched," Lenihan said. "For an expert to assess it that way and make such important comparisons I'm amazed and quite touched."

From this day to the ending of the world,

But we in it shall be remembered --

We few, we happy few, we band of brothers;

But Gewanter said it perhaps most closely resembles "The Man He Killed," a work by Thomas Hardy written at the start of World War I. In that poem, Hardy writes that the soldier and the foe he killed might have shared a drink or loaned each other money had they met somewhere other than a battlefield.

Sgt. Lenihan's poem ends not with talk of loans or drinks, but a darker scene.

I shot a man yesterday

And much to surprise

A part of me died with Him

When Death came to close His eyes.