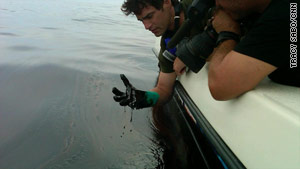 Scientists observed 130,000 to 270,000 barrels of oil on the water's surface on May 17, and think a similar amount had already been burned, skimmed, dispersed or evaporated.

The busted well is spewing oil at a rate of at least 12,000 to 19,000 barrels a day, U.S. Geological Survey chief Marcia McNutt told reporters Thursday.

A second team used a different method and came up with a range of 12,000 to 25,000 barrels per day, McNutt said. The official estimate uses the range where the estimates overlap.

The lower end of the government estimate -- 12,000 barrels per day -- would mean that about 18.6 million gallons of oil has been spilled since the April 20 oil rig explosion that started the leak.

The Exxon Valdez spilled about 11 million gallons of oil.

Worldwide, there have been more than a dozen bigger oil spills than the Gulf spill. The worst was the destruction of Kuwaiti terminals and tankers by Saddam Hussein's forces during the 1991 Gulf war, which spilled 240 million gallons, according to the Oil Spill Intelligence Report.

The amount of oil spilled could have very specific financial ramifications for BP.

"Now we know the true scale of the monster we are fighting in the Gulf," said Jeremy Symons, senior vice president of the National Wildlife Federation. "BP has unleashed an unstoppable force of appalling proportions. It's as if two Exxon Valdez tankers have already run aground, and more are on the way if they don't get this hole plugged.

"This independent government estimate shows what we expected all along -- BP cannot be trusted, because every gallon of oil that is spilled means they will pay more in fines and liability," Symons said.

The estimates are preliminary and based on new methodologies, McNutt said in a teleconference.

"We estimate that, in addition, as of May 17 a similar volume of oil had already been burned, skimmed, dispersed or evaporated," she said.

The second group used video observations to arrive at the higher figure.

The scientific teams were composed of federal scientists, independent experts and representatives from universities around the country, McNutt said. BP, which owns the well, was not involved except to provide raw data, she said.