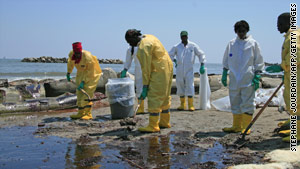 Kenner, Louisiana (CNN) -- BP and Transocean managers had a dispute over drilling plans the day of the explosion that destroyed the oil rig Deepwater Horizon and unleashed a massive oil spill in the Gulf of Mexico, the rig's chief mechanic recounted Wednesday.

Douglass Brown said he didn't pay attention to details of the dispute, "because it's not my department." But he told a Coast Guard-Interior Department investigative board that the "scrimmage" between BP's site manager and the Transocean team that ran the drill rig had to do with replacing fluid in the pipes that led to the undersea well, 5,000 feet below the rig.

"The driller was outlining what would be taking place, whereupon the [BP] company man stood up and said, 'No, we have some changes to that,'" Brown testified. He said Transocean's team, including its offshore installation manager, or OIM, and drill operator, "had a disagreement with that."

"I remember there was a slight argument that took place, and a difference of opinions, and the company man was basically saying, 'Well, this is how it's going to be,' and the toolpusher and the OIM reluctantly agreed," Brown said.

After the meeting, installation manager Jimmy Harrell told him, "I guess that's what we have those pinchers for" -- which Brown said he took as a reference to the rams on the rig's blowout preventer, a piece of equipment designed to slam shut the drill pipe and cut off the well in case of emergency.

That blowout preventer failed in the April 20 explosion and fire that sank the rig, which BP leased from Brown's employer, Transocean. BP, Transocean and oilfield services contractor Halliburton, which ran cementing operations on the well, have blamed each other for the disaster, which left 11 men dead and uncapped an undersea gusher that BP has so far failed to stop.

BP would not comment on Brown's account, citing the pending investigation. Harrell and the Deepwater Horizon's captain, Curt Kutcha, are scheduled to appear before the investigative board on Thursday.

"The people who are renting it want to go faster to drill and the people that are operating the rig want to maintain the integrity of the rig, which is a natural conflict," he said. But most oil company representatives he has worked with are "very safety-conscious," he said.

On Tuesday, congressional investigators reported that the oil giant had three indications of trouble aboard the rig in the 51 minutes before the explosion in the form of anomalous pressure readings and surges of drilling fluid from the well. Pressure on the drill pipe "unexpectedly increased" before the blast, the committee reported, citing BP's preliminary investigation.

As other witnesses have testified, Brown said the explosion occurred shortly after a roar of gas erupted from the well.

"We started hearing gas alarms go off. Gas alarms kept piling up on top of each other, more and more and more," he said. "Over the radio I heard the captain or chief mate, I'm not sure who, make an announcement to the standby boat, the Bankston, saying that we are in a well-control situation."

Shortly after that, the rig's engines revved up sharply and then tripped, leaving the platform in the dark, Brown said.

"Right on the end of that was the first explosion," he said. "The first explosion basically threw me up against the control panel that I was standing in front of, and a hole opened up underneath me and I fell down into the hole, into the subfloor where all the cable trays and wires are located at."

Brown said he managed to reach the main deck with another crew member, where they saw the rig's derrick ablaze and found "complete chaos" on Deepwater Horizon's bridge.

"It was just complete mayhem. Chaos," he said. "People were scared, they were crying. I heard later that some were jumping overboard."