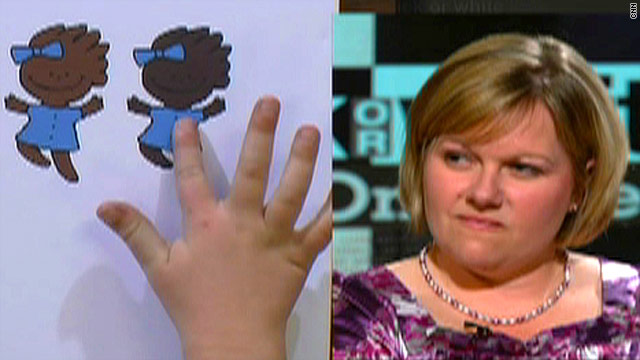 See parents talk about the different ways they address race with their young children as part of "AC360" special coverage "Black or White: Kids on race" tonight 10 p.m. ET

(CNN) -- A 5-year-old girl in Georgia is being asked a series of questions in her school library. The girl, who is white, is looking at pictures of five cartoons of girls, all identical except for skin color ranging from light to dark.

After watching her daughter answer the questions, the mother is brought to tears.

Her daughter is taking part in a new CNN pilot study on children's attitudes on race and her answers actually reflect one of the major findings of the study, that white children have an overwhelming bias toward white, and that black children also have a bias toward white but not nearly as strong as the bias shown by the white children.

The mother, whose name the study prohibits from being used, says her daughter has "never asked her about color" and that the results of the test were an eye opener, and she says she and her daughter "talked a long time about it"

Her daughter's perception on race and the fact that the issue was not taken up at home is in many ways typical.

Research and discussions with parents of the children who participated in this study, indicate that white parents as a whole do not talk to their kids about race as much as black parents.

A 2007 study in the Journal of Marriage and Family found that 75 percent of white families with kindergartners never, or almost never, talk about race. For black parents the number is reversed with 75 percent addressing race with their children.

Po Bronson, author of NurtureShock and an award-winning writer on parenting issues says white parents "want to give their kids this sort of post-racial future when they're very young and they're under the wrong conclusion that their kids are colorblind. ... It's in the absence of messages of tolerance that they will naturally ... develop these skin preferences."

Many African-American parents CNN spoke to during the study say they begin discussing race at a very early age because they say they feel they have to prepare their children for a society where their skin color will create obstacles for them.

The study has generated thousands of comments to CNN. After seeing the report, iReporter Omekongo Dibinga said, "My daughters are 4 and 2 years old. I didn't realize that at 2 years old I'd have to start teaching them to be proud of their skin color."

The father of a black girl who took part in the CNN study says, "You can not get away from the fact that race is a factor but hopefully what we instill in them at home will help them to put that in its right place and move on"