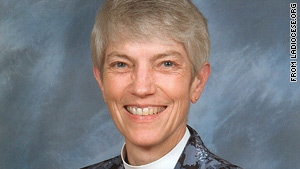 The daughter of a priest, the Rev. Mary Glasspool has said that her sexual orientation is "not an issue."
STORY HIGHLIGHTS
RELATED TOPICS

Los Angeles, California (CNN) -- The Episcopal Church consecrated its first openly lesbian bishop Saturday in the face of objections from some conservative Anglicans.

The Rev. Mary Glasspool, 56, is a new bishop surrounded by controversy.

Conservative factions in the Anglican Communion, a 77 million-member denomination worldwide that includes the Episcopal Church, have opposed the ordination of gay bishops.

Glasspool is the first openly gay bishop in the Episcopal Church since Gene Robinson took office in New Hampshire in 2004. Episcopalians instituted a temporary ban on gay bishops after Robinson's ordination but revoked that ban last summer.

The daughter of a priest, Glasspool was one of two openly gay candidates on the slate in the Los Angeles diocese. She has said that her sexual orientation is "not an issue."

"She's not afraid of conflict and is a reconciler," Bruno said, according to the Episcopal Church website.

He added that Glasspool and her partner of 19 years, Becki Sander, are an example of living service and ministry.

Glasspool is the second female bishop in the 114-year history of the Los Angeles diocese, consecrated just hours after the first, the Rev. Diane Bruce, was consecrated Saturday.

Glasspool's consecration drew opposition from Archbishop of Canterbury Rowan Williams, who said Glasspool's ordination would deepen rifts in the Church.

It "raises very serious questions not just for the Episcopal Church and its place in the Anglican Communion, but for the Communion as a whole," said Rowan, according to the church's website.

The Church of Ireland also issued a strong condemnation. That church is part of the Anglican Communion in the Republic of Ireland and Northern Ireland.

"We wish to express sorrow that Mary Glasspool, a person who is living in a same-sex relationship, is to be consecrated," the Church of Ireland said in a statement. "The elevation to senior church leadership of a person whose lifestyle is contrary to the will of God revealed in scripture is both wrong and disappointing."

Conservatives said the Episcopal Church was taking a provocative step that amounts to a deliberate snub to those in the church who believe homosexuality is a sin.