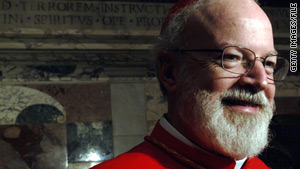 (CNN) -- Progressive Catholic groups vented outrage Friday over the decision of a Roman Catholic school in Massachusetts to rescind the admission of an 8-year-old student because his parents are lesbians.

"The idea that a child might be punished because he does not live with his two biologic parents is antithetical to notions of Christian charity and Catholic social justice," said Patrick Whelan, president of Catholic Democrats, in a statement Friday.

Other liberal Catholic and gay groups issued similar statements Friday, responding to news reports this week that a child accepted to St. Paul Elementary School in Hingham, Massachusetts, for the fall was told he couldn't enroll after the school learned that his parents are gay.

In addition to pressuring the Massachusetts school to reverse its decision and accept the student, progressive Catholic activists are attempting to do something much more dramatic: get the Archdiocese of Boston, which includes the Hingham school, to set a precedent for how the American church treats students with gay parents.

In March, the Archdiocese of Denver, Colorado, supported a decision by a Catholic school in Boulder to block two students with gay parents from re-enrolling.

While the Denver archbishop who backed that decision, Charles J. Chaput, may be the most outspokenly conservative bishop in the nation, progressive Catholics think they can get more moderate Boston Cardinal Sean O'Malley to speak against Catholic schools rejecting students over their parents' sexual orientation.

"I'm very disappointed in Chaput's actions, but he has a history of politicizing issues," said Chris Korzen, executive director of the progressive Catholics United, which has asked O'Malley to intervene in the Hingham case and to allow the child to attend St. Paul.

"Cardinal O'Malley understands that there's a place to assert church teachings but that it doesn't make sense to discriminate against a child because of his parents' background," Korzen said.

Korzen and other left-leaning Catholics said they were concerned that the Hingham school was following the example of the Denver Archdiocese in the Boulder case.

"While the relationship between the events in Boulder and Hingham [is] not known, Catholic Democrats is concerned that a narrative will develop that legitimizes the exclusion of children of same sex parents from Catholic schools," the group Catholic Democrats, which is based in Boston, said Friday.

Conservative Catholic groups, meanwhile, have been mostly silent on the matter. "I don't really have a strong opinion on this one," said Deal Hudson, a prominent conservative Catholic activist, in an e-mail on Friday. "It's a matter of the individual bishop's discretion."

O'Malley has not publicly weighed in on the case, but the Boston Archdiocese said Thursday that the Hingham school was not acting in compliance with archdiocesan policy.

"The archdiocese does not prohibit children of same-sex parents from attending Catholic schools," said Mary Grassa O'Neill, the archdiocese's secretary for education and superintendent of Catholic schools. "We will work in the coming weeks to develop a policy to eliminate any misunderstandings in the future."

O'Neill said that the Boston Archdiocese met with one of the child's parents on Thursday and that it has offered to help enroll him in another Catholic school in the archdiocese.

The parents of the St. Paul student have insisted on anonymity for them and their son in press reports of the situation.

The Catholic Schools Foundation, a Boston-based group whose board is chaired by O'Malley, said Thursday that it would not support schools that discriminated against students based on their parents' sexual orientation.`

"[N]o school that promotes an exclusionary admissions policy or practice will be considered for support," said the foundation's executive director, Michael Reardon, in a Thursday letter to school administrators. "We believe a policy or practice that denies admissions to students in such a manner as occurred at St. Paul's is at odds with our values as a foundation, the intentions of our donors, and ultimately with Gospel teaching."

Calls to St. Paul Elementary School and church on Friday night were not returned.