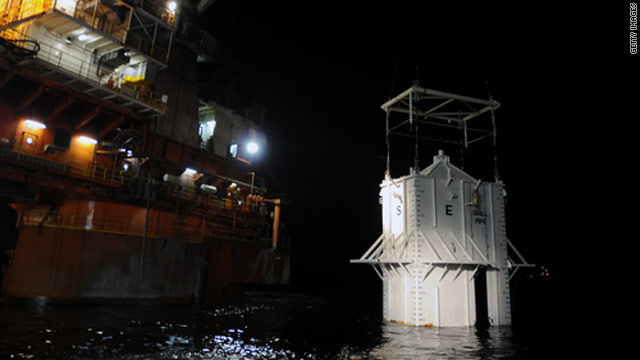 (CNN) -- The effort to place a massive containment dome over a gushing underwater wellhead in the Gulf of Mexico was dealt a setback when a large volume of hydrates -- icelike crystals formed when gas combines with water -- accumulated inside the vessel, a BP official said Saturday.

The dome was moved off to the side of the wellhead and is resting on the seabed while crews work to overcome the challenge, a process expected to take at least two days, BP's chief operation officer Doug Suttles said.

"We did anticipate hydrates being a problem, but not this significant," he said.

The tar balls, which a Coast Guard spokesman described as "pieces of emulsified oil" shaped like pancakes, ranged from a half-inch to an inch-and-a-half in diameter. Tar balls can sometimes occur naturally, said the spokesman, Erik Swanson.

Two options officials are weighing to resolve the containment dome problem are heating the dome or adding methanol to dissolve the hydrates, Suttles said, adding that they are continuing to assess other methods to capturing the oil.

Suttles said that another possible solution would be to "take ground up material of various types and try to inject it into the blowout preventer at the bottom of it and it will flow up and plug it up," an operation he compared to stopping up a toilet.

The blowout preventer is a 48-foot-tall, 450-ton apparatus that sits atop the well 5,000 feet underwater. It would stop the leak, BP has said, but it has not been working properly since the Deepwater Horizon oil rig exploded and sank April 20, triggering an oil spill that President Obama has called a "potentially unprecedented environmental disaster."

Meanwhile, hundreds of thousands of feet of boom and large volumes of dispersants continued to be deployed in an effort to capture or break up the spilled oil moving toward the Gulf coastline, and thousands of workers and volunteers diligently worked to skim the water's surface. Suttles said 17,500 barrels or 735,000 gallons of an oily-water mix were collected Friday, and crews conducted five successful controlled burns.

"It's a technology first," BP CEO Tony Hayward told CNN's David Mattingly Friday. "It works in three [hundred] to four hundred feet of water. But the pressures and temperatures are very different here. So we cannot be confident that it will work."

Watch as a Coast Guard crew flies over oil slick

"I'm praying for them to come up with anything," she said. "In the meantime, though, we have to be realistic and we have to be planning, because it's still a minimum of 5,000 barrels pouring out into the Gulf of Mexico until that thing is stopped."

This Just In blog: Oil spill from the air

"It's killing everybody down here, everybody is more or less getting ulcers worrying about this, and it's something we experienced five years ago with [Hurricane] Katrina," charter boat owner Tom Becker said Saturday. "But we knew it was coming faster than this thing is and we don't know what the long-term effect of what's going to happen with this if it [the oil] does get up here."