Machines and microbes will clean up oil 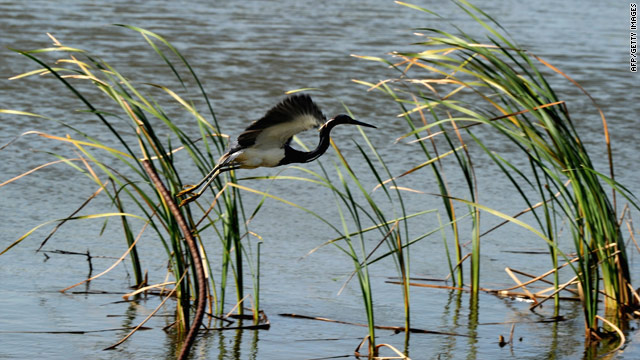 A Louisiana heron takes flight in one of the state's sensitive marshes near the town of Venice.
STORY HIGHLIGHTS

(CNN) -- There's no way to stop oily water from reaching land along the Gulf Coast, but experts will use tools both massive and microscopic to clean it up.

Oil-soaked sand on beaches in the eastern Gulf Coast can be scooped up with heavy equipment, but the grassy marshes in the Mississippi Delta can't be handled that way, said Ralph Portier, a professor of environmental sciences at Louisiana State University.

Along the Louisiana and Mississippi coast, "you're talking about a sea of grass, if you will," similar to the Florida Everglades, Portier said. "When it gets oiled, if you try and remove some of this stuff, you're going to do more damage than good.

"In Gulf Shores, Alabama, and Destin, Florida, you can do that, but not here in what we like to call the Redneck Riviera," the southern Louisiana native said.

Tides, wind and rain will drive the oil deeper into the marsh, down into the vegetative mat, making it impossible for humans to go in and clean manually, he said. But once the flow of oil is stopped -- and no one knows when that will be -- scientists will spread fertilizer to boost several species of microscopic plants that degrade hydrocarbons such as oil.

In areas of especially heavy oiling, millions more of these microbes, grown in laboratories, could be brought in as reinforcements, Portier said. In warm spring and summer weather, the light, sweet crude "will degrade in weeks to months," he said.

Asphalt-like balls of petroleum embedded in the marshes "will be a little more complicated," he said.

"The microbial community will have to bite off little pieces and degrade them a bit at a time," he said.

There is no environmental concern with the technique because the microbes are not toxic and are native to the area, with different species thriving in fresh, brackish and salt water, Portier added.

"The question is what that long time frame will do to those plant species and what that will mean for habitat for seafood and migratory birds," he said. "Picture if the Everglades were being oiled, what a national tragedy that would be. And this area is even more fragile and productive."

The Gulf Coast is home to vast numbers of birds, animals and fish that need to be protected, said Tom MacKenzie of the U.S. Fish and Wildlife Service.

Endangered sea turtles are due to come in to shore soon and lay eggs in the coastal sand.

"A whole generation could be affected," MacKenzie said.

Floating booms to block oil from coming in cannot protect the entire coast, he said, so crews are prioritizing sensitive wildlife areas, including nesting grounds for pelicans and butterfly migration areas.

"This has the potential to be truly devastating," he said.

The oil spill response team has recovered 23,968 barrels (1,006,656 gallons) of an oil-water mix, according to the Deepwater Horizon Joint Information Center. Nearly 70 boats, including skimmers, tugs, barges and recovery vessels, are being used to deploy booms and chemical dispersant, which makes the oil evaporate more readily.

Another powerful tool being used to fight the oil slick is the Mississippi River itself, Portier said.

Engineers opened floodgates on Friday to divert Mississippi water through parts of the marshlands. The force of the river water flowing toward the Gulf will help push back against the oily seawater, and later it will help flush the contamination out of the grasslands, he said.

The damage to the crawfish, shrimp and oyster populations -- and the economy that relies on them -- could be severe, Portier said. Scientists can help rebuild the aquatic species, but many businesses could be ruined by then, he said.

"This whole economic fabric could be ripped, and that in turn will affect the cultural fabric" of the Delta region, he said. Still, Portier remains optimistic.

"All of us Cajuns are tragically hopeful," he said. "My ancestors -- if you can survive yellow fever and all the other things that happened growing up in the swamps and bayous of southern Louisiana, you'd better have a smile on your face, because that's about all you have some days."