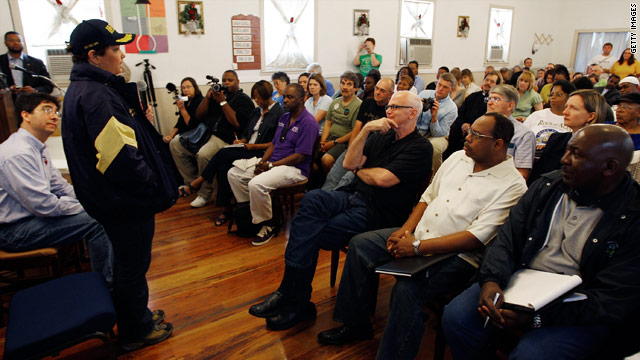 (CNN) -- As a large mass of oil drifted toward the Gulf Coast on Saturday, volunteer agencies -- some makeshift, some long established -- mobilized thousands of people through phone registries and websites.

But for many volunteers, once they were enlisted, a waiting game began.

"Extremely frustrating" is how Don Abrams, creator of the 3-day-old website OilSpillVolunteers.com, described efforts to coordinate with Ocean Springs, Mississippi, authorities and BP. Abrams said his site, along with the Pascagoula River Audubon Center, has signed up about 4,000 people ready to help.

"This accident happened a week and a half ago, and the oil is going to arrive here" before local and state authorities have a definitive plan, Abrams said.

"To me, this looks a lot like the government's response to Hurricane Katrina: 'Brownie, you're doing a heck of a job,' " Abrams said.

In 2005, then-President Bush referred to FEMA Director Michael Brown as "Brownie," in commending the agency's emergency response to Katrina.

But BP officials said Saturday that they've been working fervently to match volunteers to communities based on need and expertise.

John Curry, BP's director of external affairs, said Saturday, "We're definitely working with city officials to identify the volunteer needs, and when they are identified, we will contact the appropriate agencies."

Curry said that he understood the frayed nerves of Gulf Coast residents but that marshaling thousands of volunteers takes time and that people should temper their expectations.

"This is unprecedented in the industry," said Curry, who is based at BP's United Command Center in Robert, Louisiana. "We're doing everything we can to stop the flow [of oil] at the seabed as well as minimize the impacts."

While volunteer efforts got off the ground slowly, many businesses in the region took a wait-and-see approach. Here's a snapshot of what residents in some Gulf states were doing to prepare:

Shawn Smith, an education and outreach specialist with Save Our Seabirds, a bird rescue group based in Sarasota, Florida, said volunteers are being trained to wash birds.

The process "involves approximately 10 different wash bins with soapy water," Smith said. "They slowly get rinsed; by the 10th one, they are finally clean, and we get them off to a holding pen," he said.

The response has been overwhelming, Smith said. "This morning, we had 257 e-mails with people wanting to help and another 30 voice messages."

Smith said Save Our Seabirds has conducted wildlife response training "every year or two" since an oil spill in 1993 in Tampa Bay. Smith said the training organizes volunteers into committees. "The washing committee needs the most training on how to particularly wash the feathers and rinse the birds."

The Louisiana National Guard said it would send supplies, vehicles and communications equipment to several parishes that may be affected, including Orleans, Plaquemines and St. Bernard, according to CNN affiliate KALB.

Myron Emanuel, a USDA commodities grader who inspects shipments that come to Louisiana through the Mississippi River, said that big business will continue but that the state's fragile wildlife may be in trouble.

The oil "won't come up the river, but it's getting to the wildlife refuge areas," he said.

In Baton Rouge, Emanuel said, shrimp prices have jumped from 3.99 a pound to about $10. "Some people are going to the stores buying up the seafood, making sure they have some since prices are going up."

See BP and other emergency and volunteer resources

Private companies were sought to help with potential cleanup as the oil spill floated toward the Mississippi coast.

Dan Cambry, president of Waste Oil Collectors in Gautier, Mississippi, said his company was on standby for Northrop Grumman Ship Systems, which spread booms to protect its shipyards.

"We won't do anything until the oil comes," Cambry said. "Right now, it's like a hurricane heading toward right us. This is a nightmare and unprecedented. We're expecting it on the shore. It's just a matter of when it gets here."

On Saturday, the Mississippi Emergency Management Agency opened a call center to field questions from residents about the oil spill, according to CNN affiliate WLOX.

Bethany Kraft, executive director of the Alabama Coastal Foundation, said volunteers were calling nonstop, but "there's not a lot going on on the ground."

"At the moment, we're working diligently to help BP develop a comprehensive volunteer program, including phone response, training in terms of equipment or response. We are simply collecting names and contact info of people interested in helping."

In Mobile Bay, Carlee Griffin, administrator of Gulf Shores Marina, said overall business was about the same Saturday, but "we have had people call and cancel their vacations and fishing charters, so it is affecting us that way."