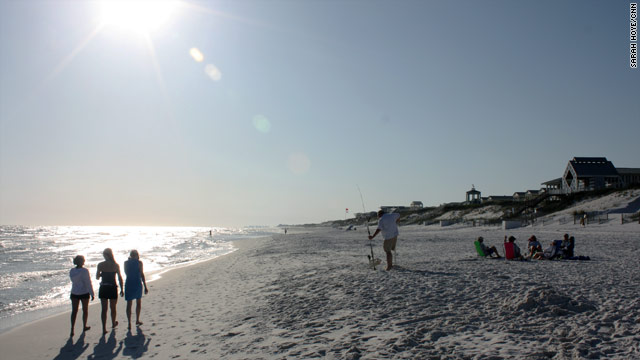 Seaside, Florida (CNN) -- Along Florida's Gulf Coast, Dave Rauschkolb is bracing for impact. It's not a hurricane he is worried about. It's oil gushing from a well at the bottom of the Gulf of Mexico.

"Our greatest hope is that they can stop the flow of the leak," he said. "That oil has to go somewhere, and I don't think booms will stop it."

Rauschkolb, an avid surfer, lives across the street from the beach. He also owns three restaurants, including the popular Bud & Alley's that overlooks the Gulf of Mexico on the Florida Panhandle.

Although he has been able to weather the recession, Rauschkolb's bottom line could be ruined by contaminated water fouling Florida's pristine beaches, he said.

"We are a seasonal economy," said Rauschkolb, who employs nearly 150 workers. "If I don't have my summer business, I am out of business."

In October, he founded the nonprofit Hands Across The Sand to fight offshore drilling.

"My biggest fear is happening right now," he said. "And now that Floridians have oil on their lips, they don't like the taste of it."

This winter, Rauschkolb organized about 1,000 people to join hands on beaches from Pensacola to St. Petersburg in protest of drilling in the Gulf of Mexico.

On April 20, an explosion sank the Deepwater Horizon drill rig in the gulf, leading to the presumed deaths of 11 missing men and a spreading oil slick. As a result of the spill, Florida Gov. Charlie Crist declared a state of emergency in six counties Friday.

When a hurricane is approaching, those living along the Gulf Coast know to board up windows and secure the awnings. But Carole McLeod, who was in Seaside on vacation, is unsure how to protect wildlife, or her beloved beach, from the spread of oil.

"I've been through Hurricane Camille and Katrina," McLeod, of Mobile, Alabama, said while having dinner at Bud & Alley's. "But we never had to face this before. What are people supposed to do?"

"Eighty percent of all income here [in Seaside] comes in the summer months. And if it doesn't, these people won't make it," she said. "It's really frightening."