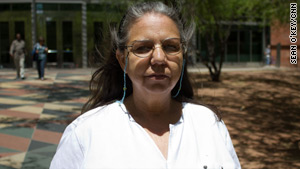 Phoenix, Arizona (CNN) -- Sue Schwartz says she's been called a racist so many times she doesn't mind the label anymore. If wanting immigrants to enter the country legally, like her great-grandparents from Mexico, and obey the laws of the land makes her racist, then so be it, she says firmly.

"I'm getting to the point I wear it with pride," says Schwartz, a lifelong Arizonan who has warily watched the growth of the illegal immigrant population in the state over the course of her life.

This year, the tide is finally turning in her favor, she says, with the passage of SB 1070, aimed at cracking down on illegal immigration.

The new law requires immigrants to carry their alien registration documents at all times and requires police to question people if there is reason to suspect they're in the United States illegally.

"I hope it makes a lot of them leave on their own, self-deportation. Hopefully that'll open up more jobs. There's a lot of people here who will do menial jobs -- maybe not pick lettuce, but these people aren't just picking lettuce any more," says Schwartz.

The new law also targets those who hire illegal immigrant day laborers or knowingly transport them.

What will Arizona immigration law do?

Schwartz, a retired USPS worker, says undocumented workers are taking jobs from citizens like her teenage granddaughter, who hasn't been able to find a job since she began looking after she turned 15.

"She can't even work at the Hometown Buffet if she doesn't speak Spanish. How fair is that?" she said.

But Schwartz and some other Americans with Hispanic backgrounds who spoke with CNN say the problem with illegal immigrants isn't just the jobs they take. It's how they're overrunning towns like Phoenix, turning them into "mini-Mexicos" with their trash-filled streets and loud music, according to Schwartz.

Of equal concern to her friend, Martha Payan, is how she claims illegal immigrants "fleece" government coffers by collecting welfare on multiple children, or vanish without a trace after an arrest or a hospital visit.

The two women, who became acquainted through various demonstrations in the metro Phoenix area, met Thursday to discuss their views outside the Maricopa County Municipal building, as more backlash against the controversial immigration law continued to flood the city.

Latin pop star Shakira arrived in town Thursday to discuss SB 1070 with Mayor Phil Gordon, who has vowed to fight the law. This comes a day after Mexico urged its citizens not to travel to Arizona.

Sporting a white baseball cap that that reads, "100% American Citizen," Schwartz says she believes that SB 1070 came about because law enforcement in Phoenix was fed up over not being able to ask suspects about their immigration status.

The 59-year-old mother of four adult children says her Mexican parents and grandparents taught her a respect for the law at an early age. Her grandmother, who lived in Juarez, Mexico, after being kicked out of the United States for smuggling drugs, encouraged her to get a good education and speak English, her second language, outside of the home.

"If I entered another country illegally I'd go to jail, yet they're demanding better treatment than their government would give us," she says.

Anna Gaines, a Mexican-born U.S. citizen, says she took up the fight against illegal immigration after becoming disillusioned by the attitudes of immigrant families that she witnessed as a teacher in the Paradise Valley School District in Paradise, Arizona.

"Many of these families were having one child after another just to earn a paycheck from the U.S. government and they didn't care about their children's education," says Gaines, the controversial founder of American Citizens United, a grass-roots organization known for its extreme views on immigration enforcement. "They didn't want to contribute, just take."

I hope it stops trespassers and lets people know ... you cross that border illegally, it's a crime.
--Martha Payan, who is originally from Puerto Rico
RELATED TOPICS

Gaines, who came to the United States as a nurse on a work visa during the Vietnam War and met her current husband, says she thinks immigrants have changed over the years.

"There used to be a level of dignity and self-respect. They were hard-working people who wanted to contribute to American society because it was better than where they came from," says Gaines, a petite woman in her 70s. "But our government has been giving them handouts for so long that now they expect them."

Gaines says SB 1070 mirrors federal law on fortifying the borders, allowing local officials to enforce immigration law in a manner that the federal government should have been doing all along.

"We as Americans have the right to defend this country's laws. There's nothing racist about protecting the country," she says.

"I hope it stops trespassers and lets people know the law is the law and you cross that border illegally, it's a crime," she says.

Payan has also been called "traidora," or traitor, by neighbors in her primarily Hispanic neighborhood who know how she feels about illegal immigrants.

"They know how I feel. I don't hide my feeling," she says. "I've already had by apartment broken into and had my car hit by an illegal. What more do I have to lose?"