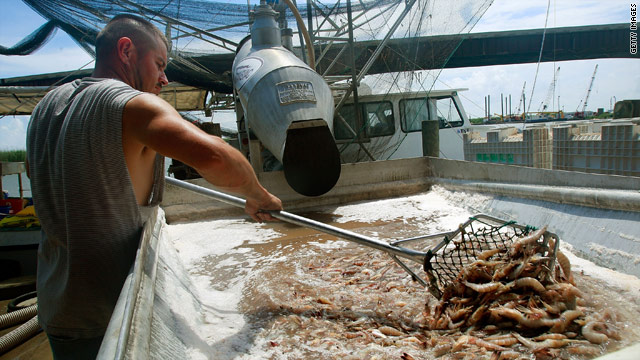 (CNN) -- The Gulf Coast braced for a greasy and unwelcome tide Thursday as the region's largest oil spill in decades threatened the marshlands and beaches at the mouth of the Mississippi River.

"This Saturday is the first date we can go catch live bait," said Glenn Sanchez, who runs a marina in Hopedale, Louisiana. "If this was to happen, this could just devastate the whole of Louisiana."

Hopedale is in what Sanchez calls the "big toe" of Louisiana, about 35 miles southeast of New Orleans.

It's where dry land gives way to a patchwork of marshes, lagoons and canals that drain into Chandeleur Sound and the Gulf of Mexico. The estuaries are rich in crab, oysters and shrimp, and Breton Sound Marina is home to a variety of commercial and sport-fishing vessels that buy bait from Sanchez.

But the spill that began last week when the Deepwater Horizon drill rig blew up and sank has cast a new shadow on a region already under heavy environmental pressure.

Share your stories of how the oil spill is affecting you

The rig sat atop an oil well that is now spewing up to 210,000 gallons of light sweet crude a day into the Gulf of Mexico. BP, the well's owner, has been trying to shut off the flow using eight remote-controlled submarines. It's had no success up to this point.

George Crozier, administrator of Alabama's Dauphin Island Sea Lab, said the worst of the spill appeared most likely to hit Chandeleur Sound and western Mississippi Sound, to the north. The barrier islands that shielded those waters were devastated by Hurricane Katrina in 2005 and have yet to bounce back, he said.

But weather patterns and the amount of oil released make it difficult to predict where the slick will wash ashore.

"It's just too early to have much sense of what's going to happen," Crozier said.

The Coast Guard has begun attempting to burn the oil off in sections, but the rainbow sheen on the surface now stretches for about 100 miles and was less than 20 miles off the mouth of the Mississippi River late Wednesday.

"This is very frightening to us, because we don't know what the impact is," said Frankie Duggan, port director for Biloxi, Mississippi.

Read the latest news on the oil spill

Louisiana is the No. 1 producer of shrimp and oysters in the United States, while fishing remains a major industry on the Mississippi coast even after casino gambling has come to dominate the local economy. The smell of heavy oil already was wafting ashore Tuesday, said Barry Deshamp, a charter boat skipper in Long Beach, Mississippi.

Deshamp's business is ramping up ahead of the summer, and while no one has canceled trips yet, "Nobody wants to fish in an oil slick," he said.

The 120-mile oil slick advanced to within a few miles of the mouth of the Mississippi River on Thursday -- well within the 10- to 20-mile range Deshamp usually fishes. The bigger commercial boats "can pretty much go around it," but the slick is drifting over prime fishing grounds for popular catches, such as red snapper.

"It's unreal they haven't even stopped it yet," Deshamp said. "At first they were telling us it's not even leaking."

Worse yet, the spill is happening at a time when Gulf shrimp are in their spawning season. That puts more pressure on fishermen already feeling the pinch from high fuel prices, increased imports and a late spring, said Scott St. Pierre, captain of the shrimp boat "Mom and Dad" out of Port Fourchon, Louisiana.

"This is our critical time. We want our babies to grow. We need south wind and warm weather," St. Pierre said. "If the south wind brings them oil, we thought we had problems before? This has the potential to be a disaster."

The first of the oil slick could hit southeastern Louisiana's shores late Friday, Gov. Bobby Jindal said. The area is home to several wildlife reserves, and the state might even put prison inmates into the effort by using them to clean oil from birds, Jindal said.

The Gulf Coast hasn't seen a major oil spill in about 40 years, Crozier said. Most of the toxic components in the crude spill are likely to evaporate in the sun, but a "physical mess" is likely to remain in the marshes.

"The occasional drum has fallen overboard, but we've never had anything of this magnitude," he said.

Wilma Subra, a chemist who advises the Louisiana Environmental Action Network, said hundreds of spotters are watching for signs of the slick along the shoreline. But until the damaged well is capped, the coast could be hit over and over again when weather patterns shift.

Subra expressed hope the planned burning would limit the slick's advance, "but it all depends on how the weather moves."