Efforts to stop leak under way after oil rig explosion 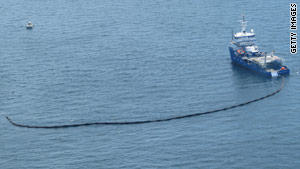 A boat works to clean up oil where the Deepwater Horizon oil rig sank last week in the Gulf of Mexico.
STORY HIGHLIGHTS
RELATED TOPICS

(CNN) -- Efforts were under way Sunday to contain and stop oil leaking from a well after a rig explosion in the Gulf of Mexico, the U.S. Coast Guard said.

Officials found oil was leaking Saturday from the well. The Deepwater Horizon oil rig was drilling when it exploded Tuesday night, the Coast Guard said. Rescuers on Friday suspended the search for 11 people missing after the blast and subsequent sinking of the rig.

Coast Guard Rear Adm. Mary Landry said Saturday that fresh oil was leaking from two places at the well, which is about 5,000 feet deep, at the preliminary estimate of about 1,000 barrels or 42,000 gallons a day.

A blowout preventer is a large valve at the top of a well. Activating it will stop the flow of oil, O'Berry said.

In addition, BP, which was leasing the rig, is mobilizing a drilling rig, expected to arrive Monday, to prepare for the drilling of a relief well, O'Berry said. A relief well is drilled to intersect the leaking well and isolate or kill it.

"The oil recovery and cleanup operations are expected to resume once adverse weather has passed," O'Berry said. "These efforts are part of the federally approved oil spill contingency plan that is in place to respond to environmental incidents."

Authorities expect the spill to remain 30 miles offshore for the next three days, Landry told reporters Sunday. A 72-hour period is used because of the availability of offshore forecasts.

A thorough investigation is under way, she said.

"We are committed to determining how and why this accident occurred," Landry said.

The remote-operated vehicles began working at about 8 a.m. CT (9 a.m. ET) Sunday. The task is expected to take 24 to 36 hours to complete, and the highly complex operation may not be successful, said Doug Suttles, chief operating officer of BP's global exploration and production business.

"The amount of resources being focused on this effort are huge," he said.

More than 30 spill-response vessels, four aircraft, thousands of gallons of dispersants and a large amount of skimming resources have been deployed to help contain the spill, BP said Saturday.

The Deepwater Horizon, a mobile unit that moved to different locations in the Gulf of Mexico, was about 52 miles southeast of Venice, Louisiana, when the explosion happened Tuesday night. The rig had been drilling for oil in its current location since January, said Eileen Angelico, a spokeswoman for the U.S. Minerals Management Service.

The explosion happened "in the process of turning the well from an exploration well into a production well," BP spokesman Bill Salvin said.


CNN's Aaron Cooper and Ashley Hayes contributed to this report.