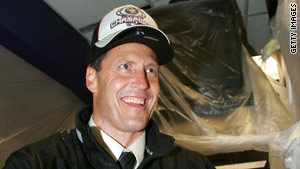 Police received a call shortly before 9 a.m. that a man was found unconscious in a room at the Grand America Hotel. Medics tried to revive him, police said.

The cause of his death is unknown.

"Words cannot describe the level of shock and disbelief that we all are feeling this morning at the loss of Keli," team Chairman and CEO Charlie Monfort said in a statement released by the team Tuesday. "Our thoughts, our prayers are with [McGregor's wife] Lori and the entire family as we all try to cope and understand how such a tragic loss could occur with such a wonderful man."

Monfort said he was in Utah on a business trip with McGregor and team Executive Vice President Greg Feasel.

McGregor, 48, had been the National League baseball team's president since October 2001, according to the team's website.

"As president of the Colorado Rockies, Keli was one of our game's rising young stars. He was a great athlete and equally great as a baseball administrator. Also, he was a great human being," Major League Baseball Commissioner Bud Selig said in a statement Tuesday afternoon. "All of baseball will miss him."

McGregor joined the Rockies after working as an associate athletic director at the University of Arkansas for four years.

He was a two-time All-American tight end at Colorado State University and was drafted by the Denver Broncos in the fourth round (110th overall) of the 1985 NFL draft. He played for Denver, Indianapolis and Seattle football teams before retiring.

He also coached football at the University of Florida for two seasons, in 1988 and 1989.

The online biography says McGregor lived in Golden, Colorado. He and his wife have four children.

He was born in Primghar, Iowa, and raised in Colorado.