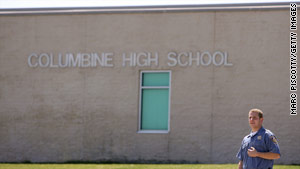 Columbine High School will be closed on Tuesday, the eleventh annivesary of the shootings at the school.
STORY HIGHLIGHTS
RELATED TOPICS

(CNN) -- The scrolling list of online student activities for Tuesday, April 20, lists a spring play rehearsal, a talk by "famous photographer, John Fielder" -- and "NO SCHOOL."

It's a tough day to be within those walls.

It was there, 11 years ago, that Eric Harris and Dylan Klebold embarked on a massacre -- shooting 12 classmates and a teacher dead and injuring 23 others before turning the gun on themselves.

Columbine High School was forever etched into the psyche of America.

The top news story of 1999. An iconic shooting. An event prompted intense debate over gun control.

"A day that changed us forever," as former President Bill Clinton said at 10th anniversary observances last year. Clinton, who was in the White House at the time of the killings, said he was personally inspired by the courage of the Columbine community.

Tuesday marks anniversary number 11, an odd-year milestone that millions of Americans will let come and go without notice. But for the survivors, for the victims' families and friends, time's steady march is not enough to dull the pain. The memories are still raw in Littleton, Colorado.

Principal Frank DeAngelis attended a teary prom last weekend when Columbine crowned a king and queen with special needs. An act of goodwill and fraternity. An act exemplifying the human spirit.

"This," DeAngelis told CNN affiliate KMGH in Denver, is what Columbine is all about."

In far away Dallas, Texas, Jordan Niland, 17, said he is sure to pick up his telephone Tuesday. He will dial the number of Richard Castaldo.

Castaldo, a junior at Columbine in 1999, suffered five gunshot wounds to his chest, back, arm and colon that left him paralyzed from the waist down.

Niland was a young boy then. But after seeing Michael Moore's documentary, "Bowling for Columbine," he struck up a MySpace conversation with Castaldo. The two have been friends since."

"The anniversary means so much to me," Niland said. "I have had the privilege to talk and get to know a survivor and to fully understand what really went on that day."

If people could personally hear Castaldo's story, Niland said, they would stop to reflect on this day. Because such a horror, he said, should not be forgotten.

And because life goes on.

A Columbine memorial dedicated in 2007, is sure to be visited Tuesday. But like the tragedy itself, the memorial, meant as a place of reflection, is incomplete, gaps running through it like the voids in people's lives.

The memorial park has posted a wish list to complete the peace it is intended to bestow.

Hackberry trees, lavender mist, spirea, purple asters. And 24 columbines. Any variety will do, the memorial's website says. As long as they are columbines.