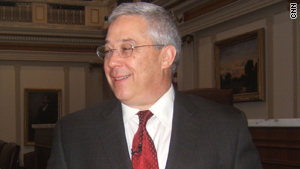 Even though authorities prosecuted a small group of extremists, whose homemade bomb killed 168 people, Key claimed that there was a government conspiracy to hide the truth. He said at a 1998 news conference, "It's obvious that there's more to this case than what some in the government want you to know."

Today, his distrust of the federal government is as deep as ever.

Key stands for many of the issues that attract Tea Party protesters to a rally on the Capitol steps: less government, lower taxes and more liberty.

"I was talking about these issues before the Tea Party movement came into existence," he said.

Using the rhetoric of colonial revolutionaries defying the British monarch, Key says today's federal government is "dictatorial," on its way to becoming "more of a tyranny."

Key's outspoken views once cost him his job.

A retired IRS agent, John Nance, had worked in the Murrah building, knew many of the victims and was outraged over Key's claim that federal agents knew of the bomb plot and did not stop it.

"I couldn't believe that at all," Nance said. "Having served with these people, I know there's no way somebody would have covered it up."

Nance beat Key in the 1998 GOP primary and went on to serve four consecutive terms in the state legislature before stepping down. By then, the raw memories of domestic terrorism on April 19, 1995, had been eclipsed by foreign terrorists on September 11, 2001.

The time was right for Key to make a comeback.

"I believe the American people are fed up with the system and the robbery of our personal rights and privileges," Nance said.

But he worries that a legitimate political debate will have an unintended consequence.

"My concerns are that there are going to be some radicals who are going to think it's OK to do things that are illegal, like killing people," Nance said, "because they think it's going to be approved by the Tea Party movement or other people who are upset with the government."

It's just the opposite, Key said. "If [the Tea Party movement] does anything, it's an avenue that people need to have so they can express themselves to the government" without violence.

Key warns that if there's another domestic terrorist attack like the one on the Murrah Federal Building, it will be the fault of the federal government.

Key's current agenda is inspired by the 10th Amendment to the U.S. Constitution, which limits federal authority over the 50 states and over individual citizens.

He legislative proposals include House Bill 2817, which would fund roads and bridges, not by taxing Oklahomans or selling bonds but by having state-chartered banks create their own money.

Another proposal, HB 2810, the State Sovereignty Act, would have Oklahoma withhold federal excise taxes from Washington if the state legislature determines that the U.S. government has violated the Constitution.

"I understand that this legislation is different than your typical legislation," Key said.

An editorial in The Oklahoman called the bills "a waste of time" and sympathized with residents of House District 90 "if they're having second thoughts" about re-electing Key.

Is Key once again out of step with his constituents? He says no. "I was elected to look out for their rights. That includes life, liberty and property."

But time is running out for Key. Assuming he is re-elected in 2010, he will become the victim of a populist anti-government movement from the 1990s: term limits.

Under Oklahoma law, legislators are limited to 12 years.

Even those who rail against the government.