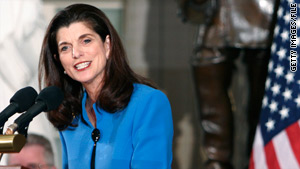 (CNN) -- Luci Baines Johnson, the younger of the late President Lyndon Baines Johnson's daughters, has been hospitalized at the Mayo Clinic in Minnesota, according to a former member of Johnson's staff.

Luci Johnson, 62, was first taken to the Seton Medical Center in Austin, Texas, on Wednesday after complaining of extreme weakness in all her extremities, said Tom Johnson, who worked for the Johnson administration and later served as president of CNN in the 1990s.

Doctors there recommended that she be treated at the Mayo Clinic for what physicians believe is Guillain-Barre syndrome, Johnson said. It's an autoimmune disorder affecting the nervous system.

The president's other daughter, Lynda Bird Johnson Robb, was at the facility with her sister. Luci Johnson's husband, Ian Turpin, and other relatives also were there.

Luci Johnson had been in excellent health with no prior medical issues of this nature, Tom Johnson said.