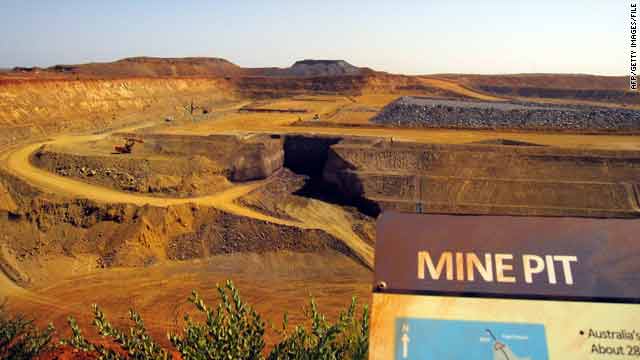 Washington (CNN) -- China's dominant position in the production of rare earth minerals has long-reaching implications for the U.S. Department of Defense, according to a recent government report.

The report from the Government Accountability Office was commissioned by Congress amid growing concerns that China's potential reduction on the supply of much-needed rare earth minerals could impact critical military uses.

China has secured 97 percent of the production of these minerals, which are used in nearly every electronic device, cell phones, computer hard drives and guided missiles.

"The longer we neglect this, the longer we don't take steps to counter this, the more it becomes a pressing problem," said Dean Chang, Research fellow at the Heritage Foundation's Center for Asian Studies.

The minerals include ores, oxides, metals, alloys and semi-finished rare earth products and cannot be reproduced artificially. "It's not like the DOD can just say, 'OK, we won't use them,'" said Chang.

There is widespread use of rare earth materials in defense systems, including precision-guided munitions, lasers, communication systems, radar systems, avionics, night vision equipment, satellites and more, according to the GAO.

China has decreased output and increased export taxes on all its rare earth materials to a range of 15 to 25 percent, according to the report.

It's not like the DOD can just say, 'OK, we won't use them'
--Dean Chang, research fellow, Heritage Foundation's Center for Asian Studies
RELATED TOPICS

The defense industry's heavy reliance on these minerals has prompted Congress and Pentagon and to examine ways to mitigate should China continue to reduce its exports.

Defense Department spokesman Dave Lapan said the Pentagon has been monitoring this issue for years, and is "looking at options to increase domestic availability of rare earth elements though developing new domestic sources, re-energizing previous domestic sources and transforming the national stockpile to include rare earth materials."

The United States has a rare earth mineral mine in southern California, which is the largest non-Chinese mine in the world, but the GAO says the mine currently lacks the facilities to process the rare earth ore into finished components such as permanent magnets.

"They have a huge middle class that didn't exist 20 years ago," said Lubin. "It's not that they're trying to screw us. They need it for themselves."

But Chang said, "The big step back for this is that the Chinese are taking a very broad-minded view of their national security and national influence. It's not just the number of their submarines or missiles, or even broad economic power. In this case China is using all of these things as tools to influence everybody, including us."

But Chang said the GAO report is not all doom and gloom.

"The GAO is not saying all is lost," he said. "You could re-establish a domestic industry, from mining through processing, but that's expensive and also that takes time."

Rebuilding the U.S. rare earth industry could take up to 15 years, according to GAO estimates.