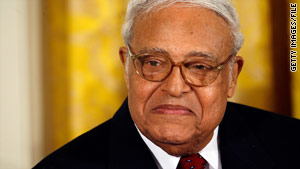 (CNN) -- Benjamin L. Hooks, a civil rights leader who led the NAACP from 1977 to 1992, has died, said the vice president for communication at the NAACP.

The cause of death was not immediately known, the NAACP's Leila McDowell said Thursday.

Hooks was "a vocal campaigner for civil rights in the United States," said the National Association for the Advancement of Colored People.

Born in Memphis, Tennessee, in 1925, Hooks grew up in the segregated South.

Hooks served in the U.S. Army during World War II, where he "found himself in the humiliating position of guarding Italian prisoners of war who were allowed to eat in restaurants that were off limits to him. The experience helped to deepen his resolve to do something about bigotry in the South," according to a biography published by the University of Memphis, where he was a professor in the political science department.

He also was a lawyer and an ordained Baptist minister who joined the Southern Christian Leadership Conference and led the NAACP for 15 years.

The organization "was suffering from declining membership and prestige when Hooks assumed his role as executive director," the University of Memphis biography said. The NAACP added several hundred thousand new members under his leadership, it said.

During his tenure, the civil rights organization worked with Major League Baseball on a program that expanded employment opportunities for African-Americans in baseball, including in positions as managers, coaches and in franchise executive offices, the NAACP said.

He also worked with colleagues to set up a program in which more than 200 corporations agreed to participate in economic development projects in black communities, the NAACP said.

"As a civil rights activist, public servant and minister of the gospel, Dr. Hooks has extended the hand of fellowship throughout his years," Bush said. "It was not an always thing -- easy thing to do. But it was always the right thing to do.

"For 15 years, Dr. Hooks was a calm yet forceful voice for fairness, opportunity and personal responsibility. He never tired or faltered in demanding that our nation live up to its founding ideals of liberty and equality."

Julian Bond, the chairman emeritus of the NAACP, praised Hooks at the time.

"Benjamin Hooks has had a stellar career -- civil rights advocate and leader, minister, businessman, public servant -- there are few who are his equal," Bond said, according to the NAACP.